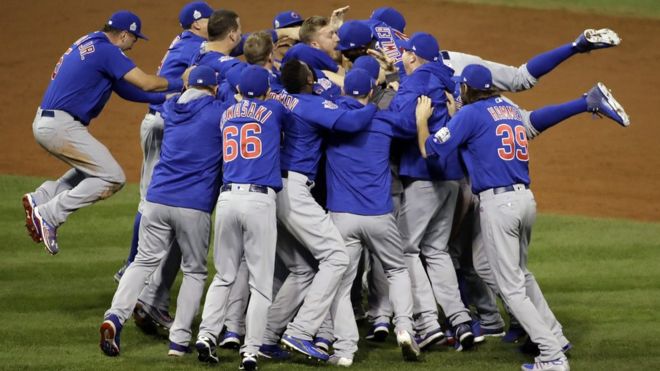 The Cubs, who had been 3-1 down in the best-of-seven series, blew a three-run lead in the final game but came back after a rain delay to clinch the title.

The last time they were crowned champions was in 1908, 108 years ago, when they beat the Detroit Tigers 4-1.

In 1945, a curse was placed on the team by local bar owner Billy Sianis.

He is said to have cursed the Cubs, so that they would never win a World Series game again, or even reach the World Series again (different versions of the story exist).

“There’s no more curse now, the goat is history,” said Cubs fan Rodrigo Gonzales moments after victory had been achieved.

US President Barack Obama, who supports city rivals the Chicago White Sox, tweeted about the win.

“It happened: @Cubs win World Series,” he wrote. “That’s change even this South Sider can believe in. Want to come to the White House before I leave?”

The win gave the Cubs their third World Series crown.

It also sparked wild celebrations in the streets of Chicago, with fans congregating outside the team’s Wrigley Field home.

Many of them took turns writing their names and words of congratulations in various colours of chalk on Wrigley’s brick walls.

“I can’t even explain how I feel right now,” said Dina Mansaour, a 33-year-old Cubs fan. “This is so epic. This is the most amazing feeling in the world.”

Cleveland’s loss leaves their fans waiting for their first World Series title since 1948.

Cubs leftfielder Ben Zobrist was named most valuable player of the World Series.

It was the second consecutive year he has won the World Series after helping the Kansas City Royals to victory last season.