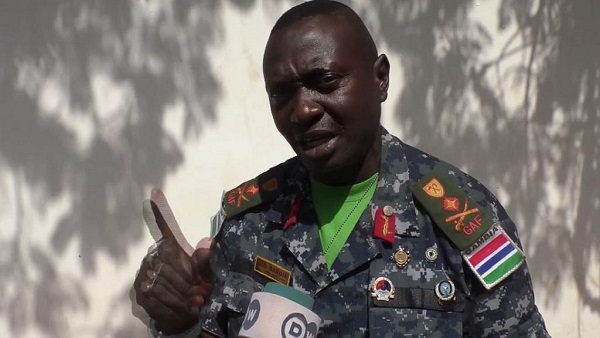 Barrow made this disclosure during his first press conference as president after his return from Dakar where he took his oath of office as president.

Badjie made the headlines during the post-election crisis which resulted after Jammeh refused to accept defeat from the December 1, 2016 polls. Badjie became famous for his pronouncements about loving his troops and that they were not going to fight troops deployed to oust Jammeh.

‘‘Let them not fear, there is not going to be any war or any fighting here. If our brothers (ECOWAS troops) even if they come, we are going to welcome them with a cup of tea, and they will put their weapons there and we will enjoy the smiling coast of Africa, honestly.

‘‘Why should we fight for a reason? Let everybody tell me. This is a political misunderstanding. There is no military solution to a political problem, let me tell you that, and we are not fools. I love my soldiers and I love the Gambian people, nobody is going to be hot here, take it from me,’‘ he told the DW Africa channel weeks back.

But before his pronouncement, Badjie had ‘switched’ allegiance between Barrow and Jammeh. Twice to Barrow and once to Jammeh. Reuters reported that he had pledged loyalty to Barrow after the polls.

But a New Year message published by the state-owned Observer disclosed that the Army were behind the then-outgoing Yahya Jammeh. His last allegiance was to Barrow. Barrow returned to the Gambia last week, four days after Jammeh accepted to go into exile amid political tension.