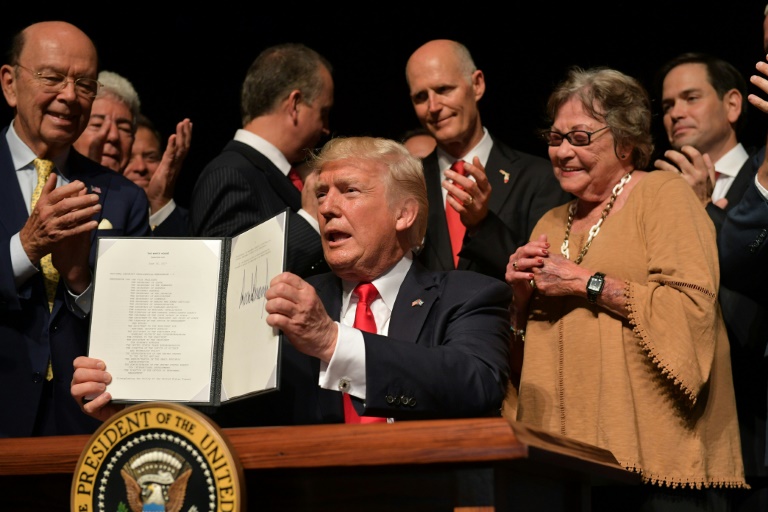 Trump flew to Miami’s Little Havana, spiritual home of the Cuban-American community, to denounce his predecessor’s “one-sided” settlement and pledge to work for Cuba’s freedom.

In practical terms, Trump’s review of the deal was limited. He will not break the diplomatic ties Obama worked so carefully to restore, nor does he plan to impose new trade sanctions.

But he did tighten rules for Americans traveling to Cuba, ban ties with a military-run tourism firm and reaffirm the existing US trade embargo — which will be firmly enforced.

The Cuban government response was restrained. In a statement on state television it denounced the measures, but said Havana “reiterates its willingness to continue the respectful dialogue and cooperation.”

“Effective immediately, I am canceling the last administration’s completely one-sided deal with Cuba,” Trump said, to cheers at the Manuel Artime Theater.

That may have been overstating his case. Trump’s new measures mainly relate to stricter enforcement of existing laws that had begun to loosen as Obama sought a rapprochement.

But he won roars of approval and cries of “Viva Cuba libre!” from the invited crowd of Cuban-Americans and Cuban exiles.

And in symbolism that will not be lost in Havana, his crowd included veterans of the ill-fated Brigade 2506, which in 1961 launched the failed US-backed Bay of Pigs invasion.

“I am proud to be an American,” said 75-year-old Modesto Castaner, who trained with the CIA in Guatemala before taking part in the failed bid to overthrow Fidel Castro’s rule.

“Trump is keeping his promise. What Obama did was virtually all to the benefit of the Castros… but in exchange for what?”

The new measures prohibit financial transactions with Cuba’s military-backed tourism conglomerate GAESA, which had hoped for a windfall from a new surge in American visitors.

Run by Castro’s son-in-law Luis Rodriguez Lopez-Callejas, GAESA has joint ventures with several foreign firms that have driven a tourism boom, including the Marriott hotel chain.

Even some who oppose the embargo gave Trump’s measures a guarded welcome.

Ramon Saul Sanchez, leader of the anti-embargo Movimiento Democracia, told AFP that the changes do not fully reverse Obama’s open-hand policy as Trump had suggested.

And he welcomed the tightening of rules on dealing with military-run enterprises, which he described as “a mafia.”

“A Cuban small businessman should not be obliged to buy from the only wholesaler that exists now, which is the state,” he said.

Signing a new National Security Presidential Memorandum, Trump announced stricter application of the rules under which Americans can travel to Cuba.

American citizens will still be able to take commercial flights to Cuba, but once again only for 12 specific reasons — ranging from journalism to educational activities.

Cuban-Americans can still visit and send funds, limiting the impact in Florida, where many emigres settled and where many turned out last year to vote for Trump.

Miami’s Cuban-American population has a reputation for diehard anti-communism, but in Little Havana, some — even those who had fled oppression — were philosophical about detente.

“Obama did the right thing,” said 77-year-old Manuel Gonzales, who left the island in 2006. “The only person responsible for the embargo was Castro. We have to look forward, not back.”

Others were not so forgiving.

Marta Diaz, now 75, left Cuba in 1967 and time has done nothing to dull her anger towards the regime. She urged Trump to impose “harsh measures” until the Havana regime falls.

Boosting travel was a key aim of Obama’s effort to restore ties with Cuba after a half-century chill, which culminated with a visit by the then-president in 2016.

Some 285,000 people visited the Caribbean country in 2016, up 74 percent over 2015, with Americans the third-biggest group after Canadians and Cuban expats.

“New restrictions on engagement with Cuban economy only pushes Cuba to China and Russia who will gladly make up the difference,” argued former White House official Ben Rhodes, the architect of Obama’s Cuba policy.

“Any limitations on travel hurt Cuban small business owners — restaurants, shops, taxis — that depend on travelers for revenue.”

Engage Cuba, a group lobbying for an end to the embargo, estimates that 10,000 US jobs in aviation and the cruise business already depend on Cuba.