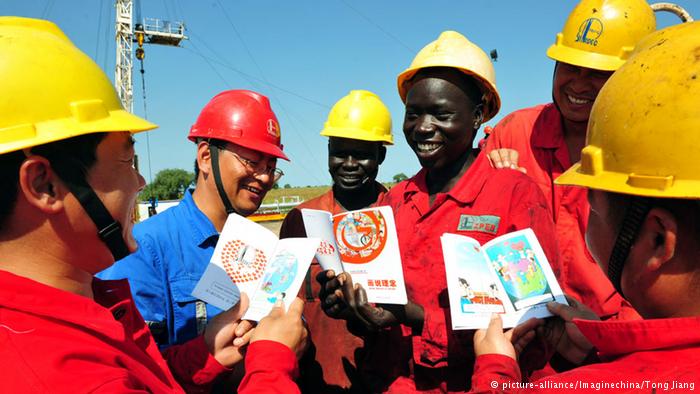 Social media giant, Twitter has announced that Ghana will host its Africa head quarters. The company's co-founder Jack Dorsey made the announcement on Twitter on...
Read more
Southern Africa

China’s popularity in Africa is strong. Its policy of not linking aid and investments to human rights and good governance has made Beijing many friends on the continent, beyond its authoritarian governments.

“We didn’t really ask that question,” said Anyway Chingwete, co-author of a survey recently published by Afrobarometer. She was referring to the difference between East and West in their approach to trade and development aid relations with Africa. But the senior project leader for the African organization that measures public attitudes on economic, political and social issues in sub-Saharan Africa believes that China’s approach, its policy of not making aid and investments conditional on performance on human rights and good governance, has won China a lot of sympathy across the continent. “It has had a positive impact in terms of the growth of trade relationships between China and African countries.” Chingwete told DW.

Zimbabwe is a case in point; the perceived meddling by western powers drove the regime of long-term President Robert Mugabe to look to the east for much needed investments. Now Zimbabweans not only feel that China has the greatest external influence in their country by far, but many of them also approve this: 48 percent say this influence is positive as opposed to 31 percent who perceive it as negative.

Contrary to countries like Mali, where China meets with a 92 percent approval rate, Zimbabweans are divided over whether China or the US offer the best model for development: 25 percent still feel the Americans have better solutions, but a significant 20 percent prefer the Chinese way. 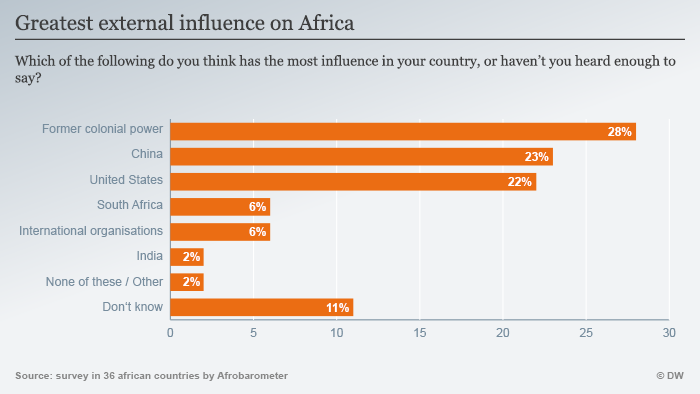 This is not to say that Africans overlook problematic aspects in Sino-African relations. Zambians have not forgotten that a couple of years ago their miners had to fight to get minimum wages from Chinese investors. The protests resulted in riots which turned deadly. Still ,72 percent of Zambians today say that China’s economic and political influence is positive. Analyst Chingwete says: “I think people possibly weigh the positive and the negative. I know there were issues. But I think they also look at the positive aspect.”

According to the survey, there are a number of factors which are liable to tarnish China’s good reputation among Africans: “Citizens highlighted issues having to do with the quality of Chinese products,” Chingwete said. More than one third of Africans (35 percent) feel the products they buy from China are not up to standard. Other negative perceptions are China’s extraction of resources from the continent, land grabbing and taking away jobs and trade from Africans. On the positive side are Chinese investments in infrastructure and other projects, business partnerships and the low cost of imported products.

Currently, former European colonial powers are still seen as the countries having the strongest political and economic influence on the continent (28 percent). But the gap with China (23 percent) is narrowing. The US comes a close third with 22 percent. But with 30 percent they are still ahead of China (24 percent) when it comes to being a role model.

Will China soon replace America in that position? Expert Chingwete doesn’t think so. The US is increasing its presence in Africa, and Africans are well aware of the benefits of trade relations with the US: “For instance we can look at the African Growth and Opportunity Act, AGOA. This has really helped most African countries to be able to trade effectively with the States.”  But, she adds, “China is really coming on board and moving very fast.”

Social media giant, Twitter has announced that Ghana will host its Africa head quarters. The company's co-founder Jack Dorsey made the announcement on Twitter on...
Read more
Business

Social media giant, Twitter has announced that Ghana will host its Africa head quarters. The company's co-founder Jack Dorsey made the announcement on Twitter on...
Read more
Southern Africa

Ghanaian officials have sought to give explanation for the cause of deaths of fishes and some dolphins washed ashore during the Easter festivities in...
Read more
Business

The African Union has developed a common continental Covid-19 digital passport for travelers and airlines. It is an initiative by African Union's lead health agency,...
Read more