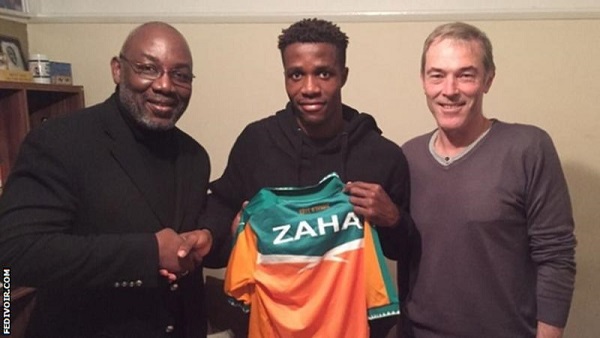 Crystal Palace winger Wilfried Zaha has submitted a request to Fifa to swap his international allegiance from England to the Ivory Coast.

Abidjan-born Zaha grew up in England and won two caps for the Three Lions, but because they were in friendly games he is allowed to switch.

The tournament in Gabon, which starts on 14 January, could see Zaha miss up to six weeks of the season for Palace.

An Ivorian Football Federation statement said Zaha had sent a letter to Fifa on Sunday requesting a nationality change.

Palace boss Alan Pardew said on Friday that Zaha had been “pushed forward, probably by his agent or people around him” to make the change but could “understand his frustration” at not being picked for England.

“There aren’t many other English players who can beat players like he does in the Premier League. Some do, but they’re not English,” Pardew said.

Zaha won his first cap for England as an 84th-minute substitute in England’s 4-2 friendly defeat by Sweden in November 2012.

He also came off the bench for the final 15 minutes of England’s 3-2 victory over Scotland in a Wembley friendly in August 2013.

Zaha, who permanently rejoined Palace from Manchester United in February 2015, also made 13 appearances for England at Under-21 level.