A row has erupted over Ecuador’s presidential elections after early results projected victory for the incumbent party’s candidate.

Results show former vice president Lenin Moreno of the Socialist Party has 51.12% of the vote, with just 4% of districts still waiting to be counted.

But challenger Guillermo Lasso had already begun celebrations after an exit poll predicted his victory.

He demanded a recount, and called on supporters to take to the streets.

He also alleged electoral fraud had been used to grant victory to his opponent.

In a series of tweets, he told the public to “peacefully defend your vote” and said he was “going to defend the will of the people”.

Final official results have yet to be announced.

If Mr Moreno is declared the winner, he will continue a decade of left-wing leadership begun by President Rafael Correa in 2007.

He would also become one of a small number of disabled world leaders – he became paraplegic after being shot in the back during a robbery in 1998.

An apparent victory for Mr Moreno was welcomed by Wikileaks founder Julian Assange – as Mr Lasso had vowed to evict him from his asylum in the country’s London embassy if victorious.

Mr Assange tweeted that he “cordially invites” Mr Lasso to leave the country within 30 days – referencing the timeframe the candidate gave for Mr Assange’s own eviction.

Mr Lasso, a former banker who wants to promote foreign investment, called for a recount after Mr Moreno started to take a lead in the preliminary results.

A poll by Periles de Opinion had shown Mr Moreno leading with 52.2%, while a poll by Cedatos showed Mr Lasso winning with 53.02%.

The incumbent President Correa, meanwhile, tweeted criticism of what he termed “violence” in several cities as early results emerged.

Local media reported that some of Mr Lasso’s supporters had gathered in the capital of Quito, as well as the city of Guayaquil. The El Comercio newspaper said the crowd removed barriers placed in the road, and bottles were thrown by some in Guayaquil.

“What they do not achieve at the polls, they want to achieve by force,” Mr Correa said.

When he was first elected in 2007, Mr Correa was one of a group of left-wing leaders in power in Latin America.

But in the decade since, conservative politicians have taken power in Argentina and Brazil. A victory for Mr Lasso would have continued that trend. 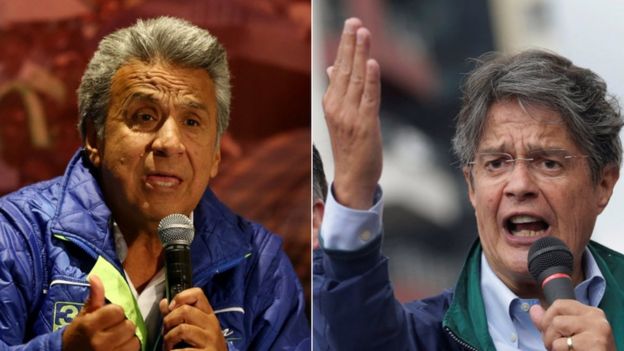