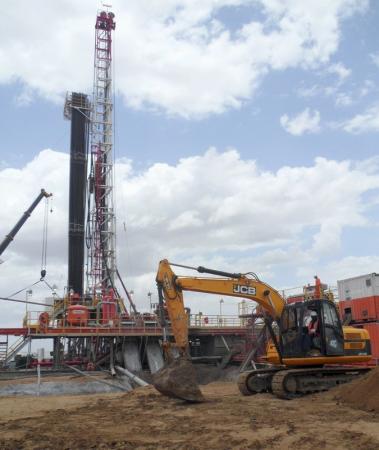 A general view shows an oil rig used in drilling at the Ngamia-1 well on Block 10BB, in the Lokichar basin, which is part of the East African Rift System, in Turkana County, file. REUTERS/Njuwa Maina

The Emekuya-1 well, located in the South Lokichar basin in North-Western Kenya, would eventually be developed to full field development, the company said on Wednesday.

The well has proven oil charge across a significant part of the Greater Etom structure, Tullow said.

“The discovery not only adds more recoverable resources to the current portfolio, but, along with Etom-2 and Erut-1 (wells), establishes the ‘northern triangle’ part of the South Lokichar Basin as an independent production hub,” Morgan Stanley analyst Sasikanth Chilukuru said.

Tullow operates Blocks 13T and 10BB with 50 percent equity and is partnered by Africa Oil Corp and Maersk Oil with 25 percent each. The Emekuya-1 well is located in Block 13T.

Earlier this year, the company said its Erut-1 well, located in the same block, discovered oil with 25 metres of net oil pay.

According to Davy Research, Tullow’s latest guidance for discovered resources in the South Lokichar Basin was 750 million barrels.