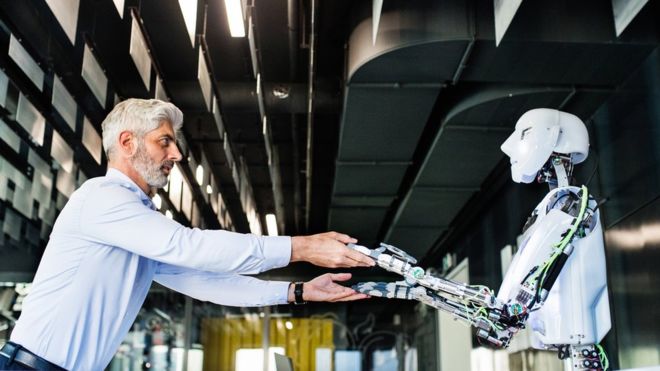 The IPPR said robots would not take all our jobs, but could increase pay inequality. Photo: GETTY

The UK government must intervene to stop automation driving up wage inequality, a think tank has warned.

The Institute for Public Policy Research said robots would not necessarily be bad for the economy.

However, it warned lower-skilled jobs were much more likely to be phased out in the coming decades, and only higher-skilled workers would be able to command better wages.

The government said it was committed to making automation work for everyone.

Young dad kills himself after ‘feeling lonely’ during covid-19 lockdown

According to the Institute for Public Policy Research (IPPR), a centre-left think tank, most jobs would be “transformed by automation, not eliminated”.

This could raise UK productivity growth by between 0.8% and 1.4% annually, and give economic growth a significant boost.

However, these gains might not be shared evenly, as on average, low-wage jobs had five times more “technical potential” to be automated than highly-paid jobs, according to the IPPR.

The sectors most at risk include:

At the same time, the IPPR said workers capable of using advanced machines would see their incomes rise, extending the earnings gap.

“Our analysis shows that jobs with the potential to be automated are associated with £290bn of wages each year,” said research fellow Carys Roberts.

“Much of this will be replaced through increased wages due to higher productivity and new jobs created, but a substantial portion could also be transferred from wages to profits.”

She added: “Within that, some people will get a pay rise, while others are trapped in low pay, low productivity sectors.”

She said the jobs most at risk of automation were disproportionately based in poorer areas of the country, and held by women and those from ethnic minorities.

“To avoid inequality rising, the government should look at ways to spread capital ownership, and make sure everyone benefits from increased automation,” she said.

A spokesman for the Department for Business, Energy and Industrial Strategy said the UK’s labour market was “resilient and diverse” and that advances in technology were helping to “bring new jobs”.

“The government is committed to ensuring that the UK is to able to seize the opportunities and overcome the obstacles that exist in this area,” he said.

“Government is working closely with industry to ensure the benefits of new technologies are felt across different sectors of the economy up and down the country, while creating new high-skill, well-paid jobs.”