Outrage over the sacking of AU Ambassador Chihombori-Quao

Many Africans in the Diaspora have been angered by the sacking of the African Union (AU) Permanent Ambassador in the United States.

Dr Arikana Chihombori-Quao appointed to the position in December 2016 and has been able to galvanize the support of peoples of African Descent in the U.S and beyond.

Chihombori-Quao is very outspoken and has become a leading voice for Pan-Africanism.

She has been heard on several occasions criticizing the west for maintaining neo-colonial policies that are meant to keep Africa poor.

In some media interviews she has called out countries like France that has been holding the national reserves of fourteen African countries since 1961.

But her sacking in a letter dated October 7, 2019 has angered many who are demanding her reinstatement.

In the letter seen by Africa Feeds, announcing her dismissal the chairman of the AU Commission, Moussa Faki Mahamat did not state the reason for sacking her.

She is officially expected to end her duties on October 31, 2019. 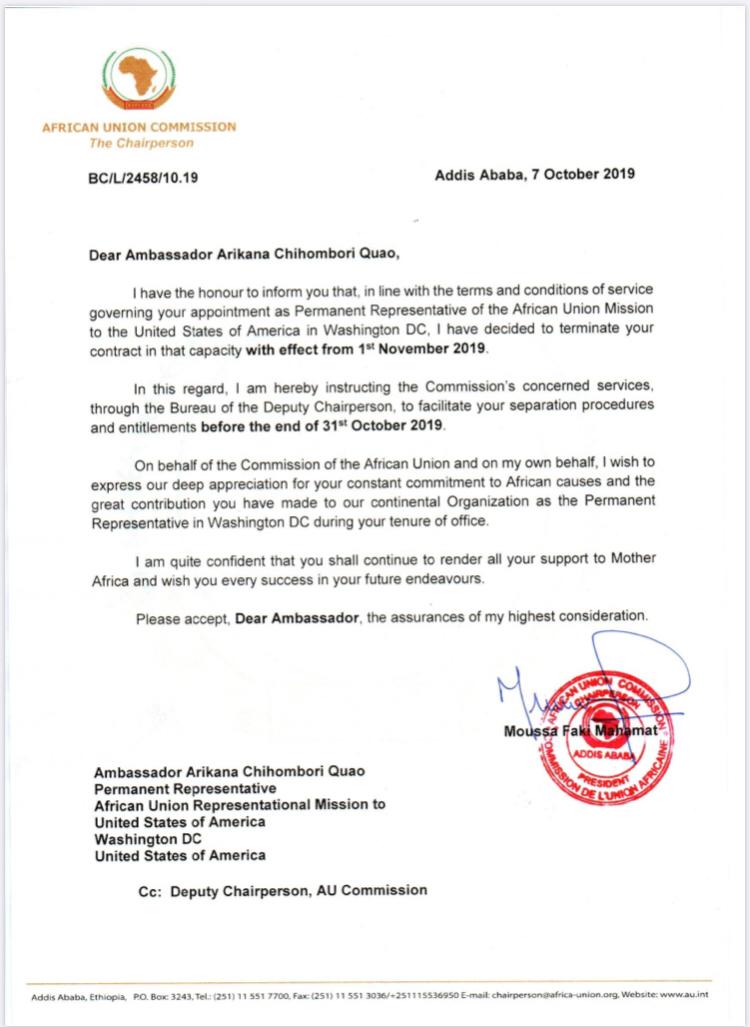 On the back of her dismissal, some Africans in the diaspora have launched a petition to get her reinstated.

More than 2,000 people have signed the petition which said “not everyone is embracing her (Dr Arikana Chihombori-Quao) bold but honest discourses for effecting change for the betterment of Africa.

The questions are: why was she dismissed, or better, who benefits from her removal? Were African heads of states and governments consulted? Who called the shot? Or is Africa, and peoples of African descent, still facing the debilitating effects of modern colonialism or neocolonialism?”

The petition claims there was “undue influence and pressure exerted on African leaders and people by the former colonial powers of Europe” to sack Chihombori-Quao.

It called “for Dr. Chihombori-Quao’s immediate reinstatement to her position and an apology from the AU Commission.”