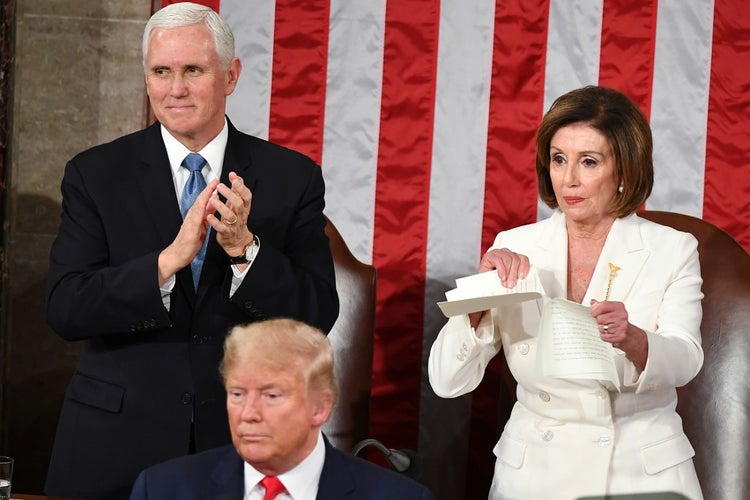 Staff Writer
Africa Feeds Staff writers are group of African journalists focused on reporting news about the continent and the rest of the world.
- Advertisement -
House Speaker Nancy Pelosi ripped up her copy of Donald Trump’s State of the Union address Tuesday, in a pointed political gesture after listening tight-lipped to the president tout his achievements to Congress.

The tension between Trump and his Democratic nemesis was palpable from the outset, as Pelosi extended her hand for a handshake — and the president failed to return the favour.

Seated in silence behind the president in the House of Representatives, Pelosi frowned, repeatedly shook her head and smiled disbelievingly until he finished speaking and Republicans erupted in applause — at which point she rose and very visibly tore up the papers in front of her.

Asked afterwards by a reporter to give a reason for her gesture, Pelosi replied: “Because it was the courteous thing to do, considering the alternatives.”

And in a follow-up tweet, the 79-year-old Pelosi said Democrats would “never stop extending the hand of friendship to get the job done.”

Trump was impeached by the Democratic-controlled House six weeks ago, and the flashpoint with Pelosi comes one day before the US Senate is all but certain to vote to acquit him on charges of abuse of power and obstruction of justice.

During the impeachment crisis, Trump, 73, has repeatedly assailed the speaker for her impeachment “hoax,” branding her “nervous Nancy” and “crazy Nancy” on Twitter.

Pelosi’s gesture capped a night where the country’s bitter political divide was on full display, as Trump’s address earned a triumphant reception from the Republican half of Congress — but sullen silence, boos and jeers from the Democrats present.

Chuck Schumer, the senior Democrat in the Senate, said that the speech was “more like a Trump rally than a speech a true leader would give”.

“It was demagogic, undignified, highly partisan and in too many places, untruthful,” he said.

The White House was quick to hit back at Pelosi, saying she had insulted the Americans honored in Trump’s speech, from a veteran airman to a premature baby or a mourning military family.

Republican Senator Lindsey Graham doubled down, tweeting: “Tearing the speech up is not going to tear up the accomplishments of this President.”

His fellow Republican Senator Marco Rubio said Pelosi had “embarrassed herself” by ripping up the speech.