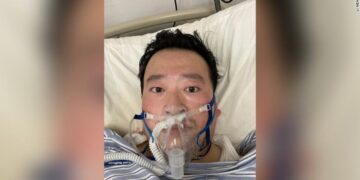 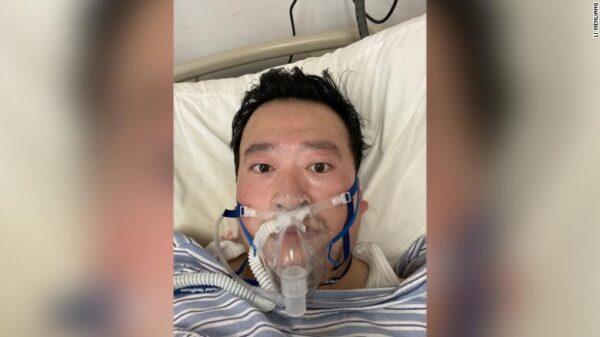 Li Wenliang pictured in an intensive care bed after contracting the virus. He died on Thursday.

The Chinese doctor who sounded early warnings about the Wuhan coronavirus is in a critical condition, according to the hospital treating him and several state media outlets. Hours earlier the same state media organizations reported that he had died.

Wuhan Central Hospital said on its official Weibo account that Li Wenliang, 34, had become seriously ill. “In the fight against the pneumonia epidemic of the new coronavirus infection, our hospital’s ophthalmologist Li Wenliang was unfortunately infected. He is currently in critical condition and we are trying our best to resuscitate him,” the statement read.

Following the initial reports that stated he had died, Chinese social media erupted with a mix of a profound grief and anger.

Li raised the alarm about the novel coronavirus in December, posting in his medical school alumni group on the Chinese messaging app WeChat that seven patients from a local seafood market had been diagnosed with a SARS-like illness and were quarantined in his hospital in Wuhan. Soon after he posted the message, Li was accused of rumor-mongering by the Wuhan police.

He was one of several medics targeted by police for trying to blow the whistle on the deadly virus in the early weeks of the outbreak, which has sickened more than 28,000 people and killed more than 560. He later contracted the virus himself.

The Global Times announced Li had died in a tweet at around 10:40 p.m. local time Thursday, linking to a report that cited friends and doctors at Wuhan Central Hospital. It deleted the post several hours later. Other Chinese media outlets also deleted their reports of his death, without explanation.

The World Health Organization released a message of condolence following the initial reports that Li was dead but later updated their statement to say they did not have any information about the doctor’s status.

The death toll and number of people infected by the Wuhan coronavirus continues to grow, with no signs of slowing despite severe quarantine and population control methods put in place in central China.

The number of confirmed cases globally stood at 28,275 as of Thursday, with more than 28,000 of those in China. The number of cases in China grew by 3,694, or 15%, on the previous day. There have been 565 deaths so far, all but two of which were in China, with one in the Philippines and one in Hong Kong.