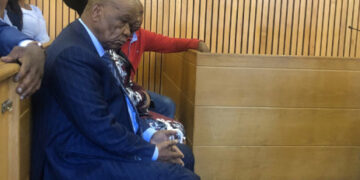 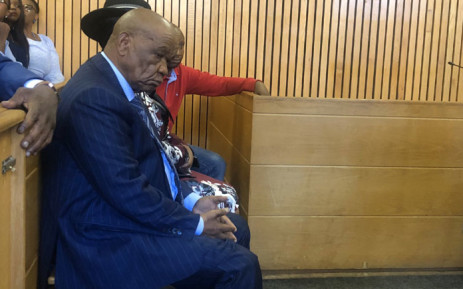 Lesotho Prime Minister Thomas Thabane on Monday appeared in a magistrate court as he faces charges of murdering his ex-wife.

He did not show up last Friday with his office saying his no-show wasn’t to evade justice but to seek medical attention in South Africa.

Prime Minister Thabane was expected to be charged formally with murder, attempted murder, and malicious damage to property.

But he told the court that he cannot be charged over the murder of his ex-wife because his position makes him immune from prosecution.

The presiding magistrate subsequently referred the case to the High Court, to sit as the Constitutional Court to hear the case with a panel of at least three judges.

The current first lady was detained this month and charged with ordering the murder of her rival.

Her trial date was postponed at a recent hearing.

Lipolelo Thabane, the ex-wife of Thomas Thabane, according to police was shot dead outside her home in the capital Maseru just before the prime minister’s inauguration in 2017.

Thomas and Lipolelo Thabane as a couple got involved in a very bitter divorce proceedings before her death.

Earlier the murder of Lipolelo death was believed to have been carried out by unknown armed men.

At the time, the prime minister was living with Maesaiah, 42, treating her as his wife.

The couple got married at a ceremony held at a packed stadium in Maseru two months after the murder.

It was only recently revealed through court papers filed by the country’s police commissioner, Holomo Molibeli, that there could be more to it.

The Prime minister Thabane, 80 had described his ex-wife’s killing as “senseless” when it happened.