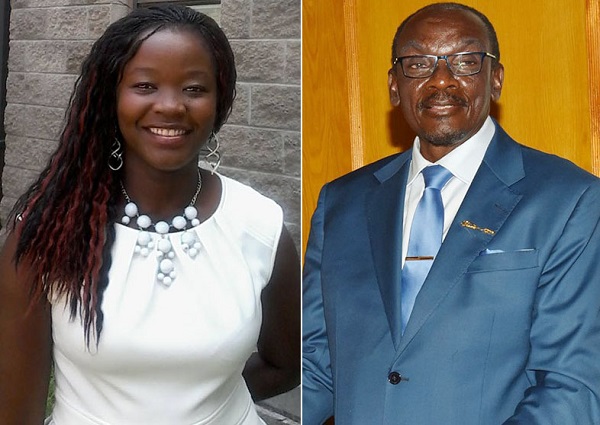 The Vice President of Zimbabwe has been placed in an embarrassing situation after he was caught on a leaked tape arranging an office sex with his lover.

Kembo Mohadi is accused of having an affair with a married woman identified as Abbigal Mumpande.

A leaked phone call between the two lovers reveals how passionately they are in love and have been seeing each other.

In one of the conversations caught on tape, the 71-year old Vice President planning to have sex with his younger and married lover in the office.

The young lover in the conversation also warned the vice president of possible overdose on an aphrodisiac as he prepares himself for some action in bed.

In one of the conversations the vice president said “Yes I have, I drank two cups,” referring to the aphrodisiac.

His response surprises Abbigal who warns her elderly lover: “You will overdose.”

“It’s not that sour,” Mohadi says, as if to assure her.

Zimlive reports that on Sunday the vice president was confronted by a man, Jacob Mumpande who accused him of having an affair with his wife.

“The vice president just kept apologising,” a source briefed on the incident said adding that “They left after an hour. Abbigal was in tears.”

The news outlet reported that following the confrontation, an unidentified woman who was with vice president Mohadi inside his Harare home got so angry and hit the vice president with an object.

Mumpande reportedly obtained recordings of phone calls of the vice president talking to Abbigal and expressing his undying love for her. He also allegedly sent her nudes.

Why older women seek love with young men in Gambia