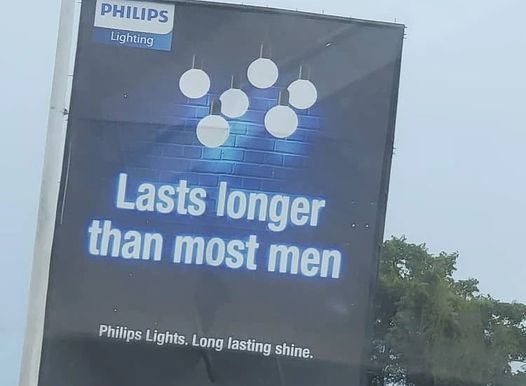 A lighting advert by electronics giant Philips has sparked anger among some Ghanaians.

The company has erected several billboards on streets of major cities in the West African nation drawing attention to its products.

Among others, the billboards subtly suggest that the lighting products of Philips last longer than the sexual strength of men.

Some of the boards also suggest that the Philips products last longer than the terrible traffic situation in Kasoa, one of Ghana’s fastest growing communities.

But these messages have not gone down well with some Ghanaians who have begun social media campaigns to demand that the billboards are brought down.

Some of the campaigners argue that the sexual connotations of the advertisements will promote the use of unlicensed aphrodisiacs and its associated health risks in the country.

The electronics giant has not reacted to the concerns over the ads but not everyone is angry with the ads.

Some consumers say they these are simply creative ways of advertising products.