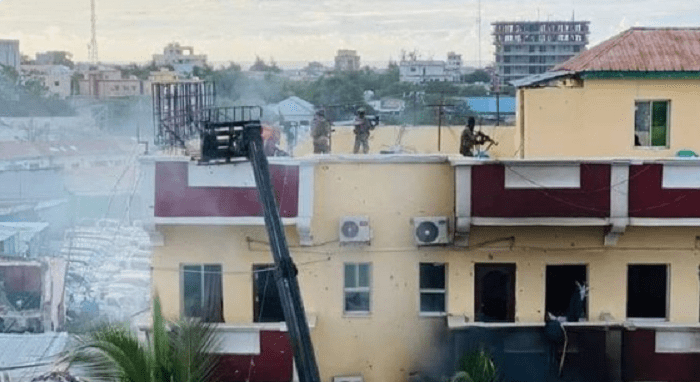 At least 21 people were killed after al-Shabab militants attacked a hotel in the Somali capital, Mogadishu on Friday.

Security officials said the attackers entered the building after detonating two explosives outside the hotel. They then opened fire upon entering the hotel.

A special police unit managed to rescue dozens of guests and staff from the Hotel Hayat on Friday.

Security forces were able to end the siege finally in which more than 20 people were killed and dozens injured, authorities said on Sunday.

Several others who had been taken hostage in the stand-off at the Hayat Hotel in Mogadishu were freed.

“We have confirmed so far 21 dead people and 117 others injured,” Ali Haji, the minister for health, told national broadcaster SNTV.

A newly married couple were wounded by mortar attack.
A mom and her kids were killed.
During the terror attack at Hayat Hotel, Alshabab Khawarij in other parts of the city fired mortar rounds.#Somalia #Mogadishu pic.twitter.com/xXNKlo5LkS

The Hayat Hotel is a popular place for lawmakers and other government officials.

Aden Ali, a survivor, told Reuters that he was drinking a cup of tea at the hotel when he heard the first blast.

“We were many on the run, over a dozen. When I went out of the hotel, I could see eight of us. Maybe the rest died in the shooting,” Ali was quoted by Reuters as saying.

Friday’s attack is the first major incident since President Hassan Sheikh Mohamud took office in May.

Hadi, educated engineer & businessman who lived in Norway many yrs, came back to #Somalia & has been working with Ministery of Petroleum

15 others reportedly died in the Hotel’s attack pic.twitter.com/cI9AQ10c3e

In August 2020, al-Shabab said it was behind an attack on another hotel in Mogadishu in which at least 16 people were killed.

@EU_in_Somalia strongly condemns the cowardly attack on the Hayat Hotel in #Mogadishu and we share out heartfelt condolences with those affected by the violence. The EU stands firm as a partner to the Federal Government and the Somali people in its pursuit of peace and stability! pic.twitter.com/PklsfVnLCp

Al-Shabaab has been fighting to topple the Somali government for more than 10 years. It wants to establish its own rule based on a strict interpretation of Islamic law.