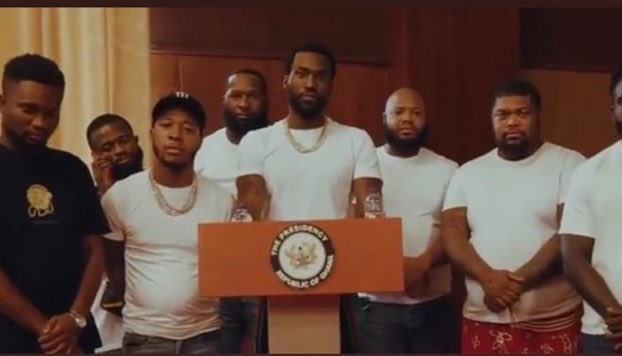 Some Ghanaians have expressed anger over the use of the presidency by American rapper Meek Mill for a music video.

During his recent visit to the West African country, Meek Mill met President Nana Akufo -Addo at the Jubilee House.

The meeting was facilitated by Gyankroma Akufo- Addo, daughter of the President.

It coincided with his visit to the country to perform at the Afro Nation concert as part of the Christmas festivities.

But a video has emerged which showed Mill rapping at various sections of the seat of government.

This has not gone down well with some Ghanaians who are questioning whether a Ghanaian will be allowed to use the presidency for such a purpose.

Although part of the video appears to have been shot with a phone, it has generated controversy on social media.

All those responsible for this despicable desecration of the Jubilee House by Meek Mill must be fired immediately.

How do those explicit lyrics from the president’s lectern project Ghana positively?

Is Ghana’s seat of government no longer a high security installation? pic.twitter.com/Wwo2rbGIjl

Quite unfortunate whatever Meek Mill did at the Jubilee house.

Who gave that much access needs to come and explain.

But on a real, when would this Government stop embarrassing us ?

Meek Mill dems are not even rated in the US, but they come to Ghana and get treated like kings.

The audacity for him to shoot a video in the Jubilee House shows how Addo D has cheapened the presidency.

Our leaders are not just CLOWNS; they’re a LIABILITY to this country. pic.twitter.com/tL8dQzaxuq

Nah!! This is getting serious, why are we allowing this? Can Meek Mill shoot a music video in the white house? Eii Gh lol 😆. What a country! We have given these guys too much liberty they don’t even have in their country. #MeekMill pic.twitter.com/5s7svSzjId

The rapper has however deleted the video promoting the music hours after posting it on his Instagram page.

Meek Mill later on Monday apologised over the incident, saying he didn’t know it would offend Ghanaians.

My apologies to the people if any disrespect! We still gonna push to make the connection between black people in America and Africa … what I’m trying to do is more than a video and you should see coming soon! My apologies to the the office also!

Wizkid to appease fans after abandoning them at Accra concert