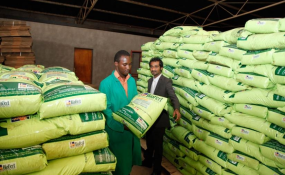 The conference brought together over 300 international fertiliser and agribusiness executives and regional government representatives from over 45 different countries. The participants discussed among other things related to the production of fertilisers, increase trade and boost agribusiness in Tanzania and across Africa.

They also focused on the role of fertilisers within Africa agribusiness and how African agricultural industry can work with international partners to strengthen and improve its agricultural output.

The conference was conducted in Dar es Salaam at a time when many African countries, including Tanzania, face various challenges in practicing agriculture. Lack of fertilisers among African farmers and poor application of the product are among many challenges that face the sector.

Also high price for agriculture is another big obstacle that hinders agricultural development in most of African countries and in particular Tanzania. Failure to use fertilisers as required has been leading to poor crop production and thus hunger outbreak in some countries.

AFAP Vice-President Mr Richard Mkandawile told participants that the challenge of food production in Africa is a clarion call for coordinated efforts to transform African agriculture and hence accelerate the continent’s economic growth.

In that matter, fertilisers play a critical role in securing better productivity for African farmers but in combination with other inputs such as better seeds and agronomic practices.

Earlier, the Minister for Agriculture, Livestock and Fisheries, Dr Charles Tizeba, called upon all fertiliser producers and dealers to lower fertilisers’ prices so that majority Tanzanians could manage to apply it in agriculture production.

He said fertiliser production cost has gone down across the world but still it is being purchased at higher prices in the country. As Dr Tizeba pointed out that the global fertiliser price is going down, the same thing must happen in Tanzania so that local farmers could benefit.

In other words, the ongoing lowering fertiliser prices across the world must have an effect to Tanzania farmers and not give profit to fertilisers companies and dealers. Fertiliser transportation costs in Tanzania are shocking. It was revealed last week that transporting fertiliser from Dar es Salaam to Kibondo in Kigoma Region is supposed to cost only 80 US dollars per tonne but some traders increase the price to 100 US dollars per tonne.

The minister declared the government’s commitment in making sure fertiliser prices are harmonised so that majority farmers could apply it in farming. He said the government is investigating who is behind the ‘dirty game’.

According to Dr Tizeba, several strategies are underway to reduce fertiliser prices by 20 per cent in the next farming season. “We have a very big problem in this business, some few people are stealing from farmers and the government, we are therefore investigating this matter,” he said.

However, the country’s total fertiliser consumption is still far below the Abuja Declaration target at 19.3 of fertiliser per hectare, this means, there must be more push more to boost productivity.

However, for reliable production and supply of fertilisers to farmers in the country, there is need for the government to ensure transparency and open doors for investors to bring competition in the business.