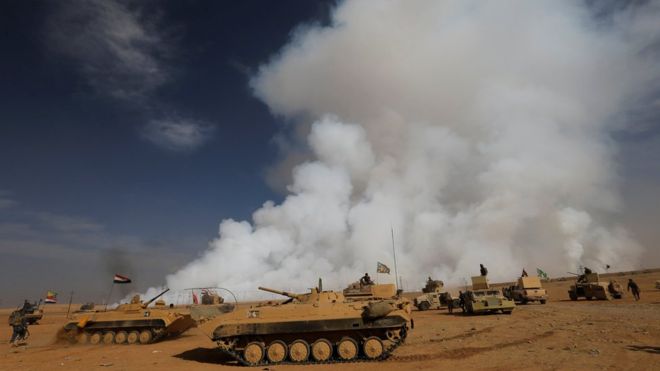 US soldiers at a base near the northern Iraqi city of Mosul have donned protective masks against toxic fumes from a sulphur plant set alight in fighting with so-called Islamic State.

They took the precaution after the wind blew smoke from the fire towards Qayyarah air field.

In Baghdad, Turkish attempts to join the offensive against IS were rebuffed.

Qaraqosh, Iraq’s largest Christian town before the war, is said to be largely empty but IS has laid landmines on the approaches to Mosul.

The militants have been attacking with suicide bombers elsewhere, driving vehicles laden with explosives at high speed towards government lines.

Friday’s IS attack on the city of Kirkuk, 170km (105 miles) south-east of Mosul, now appears to be over, leaving at least 35 people dead and 120 wounded, according to medical sources.

Qayyarah acts as the main US hub for supporting the Iraqi government offensive to drive IS out of their Mosul stronghold.

The fire began two days ago, when IS fighters reportedly set the sulphur plant alight in Mishraq, south of Mosul.

“The winds have actually shifted south, so, as a precautionary measure, the troops at Qayyara West have donned their personal protective equipment – continuing their operations at this point in time,” an official told Reuters news agency, speaking on condition of anonymity.

An Iraqi commander, Qusay Hamid Kadhem, told AFP news agency two civilians had died from the fumes and “many others” had been injured.

A similar fire at the Mishraq plant in 2003 burnt for weeks, sending huge amounts of sulphur dioxide into the air. It caused respiratory problems for local people and damaged the environment.

Sulphur dioxide gas is toxic when inhaled or when the skin or eyes are exposed.

When inhaled, it causes irritation to the nose and throat. Exposure to high concentrations causes nausea, vomiting, stomach pain and corrosive damage to the airways and lungs.

US Defence Secretary Ash Carter made an unscheduled visit to Baghdad on Saturday after talks with Turkish leaders in Ankara on Friday on how they might play a part in the Mosul operation.

Iraqi Prime Minister Haider al-Abadi told Mr Carter: “I know that the Turks want to participate, we tell them thank you, this is something the Iraqis will handle. If help is needed, we will ask for it from Turkey or from other regional countries.”

Differences between Iraq and Turkey have come to the fore since hundreds of Turkish soldiers began training Sunni Muslim fighters at a base in northern Iraq last year.

The Sunni Turks fear the liberation of Mosul may be spearheaded by Shia Muslims and Kurds. Turkey says Kurdish fighters in Syria and Iraq have ties to the Kurdish militant PKK in Turkey.

The presence of the Turkish military has also drawn protests among radical Shia in Baghdad.

Mr Carter, who is in Iraq for the third time this year, has overseen a steady increase in US troop numbers there.

More than 4,800 US soldiers are in Iraq and at least 100 US special operations personnel are operating with Iraqi units.

The offensive against Mosul, which began on Monday, is a two-pronged operation, with Iraqi government forces attacking from the south and Kurdish fighters advancing from the east.

Reports on Tuesday that Qaraqosh had been liberated caused an outpouring of joy among Christians who had fled to Kurdish areas when IS swept into Mosul in June 2014.

But the reports turned out to be premature as snipers impeded the progress of government forces.

In Kirkuk, the governor, Najmiddin Karim, said “all” of the IS attackers had been killed by the security forces.

However, Kurdish forces controlling the city detained a number of suspected IS members on Saturday, according to an AFP photographer who recorded the arrests.

Photos of damaged buildings in the city show the full ferocity of Friday’s combat, with facades peppered by gunfire.

Concern for the fate of civilians in Mosul increased on Friday after reports that IS was herding villagers into the city, possibly to use them as human shields.

The UN is also investigating reports 40 people were shot dead by IS fighters in one village.