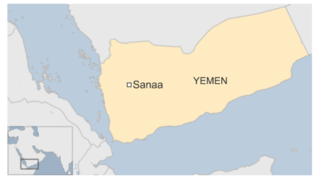 An Australian football coach who was kidnapped in Yemen has appeared in a video saying his captors demand the Australian government pay a ransom to secure his release.

In the footage released online, 56-year-old Craig Bruce McAllister said he was kidnapped by an unnamed group.

Australia said on Wednesday it was aware one of its nationals had been kidnapped in the country.

It has previously said it does not pay ransom money.

Yemen is engulfed in a war between forces backing President Abdrabbuh Mansour Hadi and Houthi rebels.

Mr McAllister is believed to have lived in Yemen for about six years, where he was coaching a youth football team in the capital, Sanaa.

In the 24-second video, Mr McAllister, who appears unharmed, says he was “kidnapped by a group here”.

“They are requesting that the Australian government send the money they have requested.”

But no ransom amount was disclosed and no group has claimed responsibility for the kidnapping.

Kidnappings of foreigners are frequent in Yemen.

Earlier this month, a French-Tunisian woman who was kidnapped last December while working for the International Committee of the Red Cross was released.

A Saudi-led coalition backing Yemen’s internationally recognized president, who is exiled, has been fighting the rebels and their allies since March 2015.