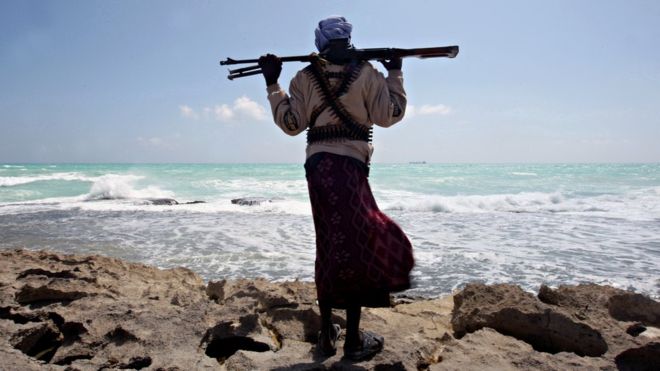 Their ship, the FV Naham 3, was seized south of the Seychelles in March 2012.

The vessel and its crew were kept off the Somali coast, until it sank. The hostages – from a number of East Asian countries – were then brought ashore and held in the bushland.

They are believed to be some of the last remaining captives seized by Somali pirates in the mid-2000s.

Somalia: Outrage over abduction, rape of girls aged 3 and 4

Piracy off the coast of Somalia has reduced significantly in recent years.

The men are from Cambodia, China, Taiwan, Indonesia, the Philippines, and Vietnam.

John Steed, who works with the Hostage Support Partnership, said information about the hostages’ condition was limited to photos sent to prove the men were still alive.

“We won’t know until I actually pick them up inside Somalia tomorrow,” he told the BBC.

“The guys are pretty ragged, very thin, malnourished. Several of them had to see a doctor today because they were unwell.”

He said he could not comment on whether any payment was made to secure the captives. However, he said the local community and tribal elders were involved in the “difficult situation”.

“These are poor fishermen. The ship had no value, they had no insurance, and of course governments don’t want to be involved in these sort of negotiations either,” he said.