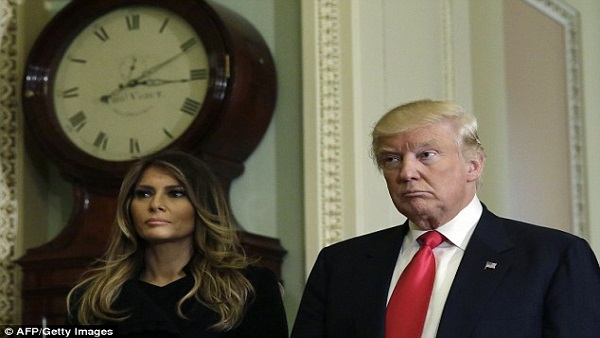 Donald Trump with his wife, Melania. The soon-to-be First Lady grew up in Slovenia, which is overwhelmingly Catholic

Pope Francis dodged a question about what he thought of the election of Donald Trump today, saying he was interested only in how politicians’ choices impact on the poor.

Asked by a journalist what he thought of Tuesday’s astonishing victory for the Republican underdog, the Argentina-born pontiff said: ‘I do not make judgements on people and political men, I only want to understand what suffering their behavior causes to the poor and the excluded.’

The Pope went on to tell Eugenio Scalfari, of Italy’s La Repubblica newspaper, he was mostly concerned at the moment about the plight of refugees.

He said: ‘Money is against the poor but there are also poor people in rich countries who fear the acceptance of their peers from poor countries. It’s a vicious circle and it must be stopped. We must break down the walls that divide.’

It is not clear whether the Pope was making a veiled reference to Trump’s plans to build a huge wall along the border with Mexico to keep out illegal immigrants.

Earlier this year the Pope suggested Trump’s stance on immigration, which included a campaign pledge to ban all Muslim immigrants, was ‘not Christian’

A papal spokesman later said that had not been a personal attack.

Earlier this week the Vatican’s Secretary of State, Cardinal Pietro Parolin, wished Trump well and said he would pray for the President-elect’s ‘enlightenment’ in ‘service of the world’s welfare and peace’.

Although the Pope is considered to be more socially Left-wing than his predecessor, the German-born Pope Benedict XVI, he is still the head of a Catholic Church which is steadfastly opposed to abortion, same-sex marriage and stem cell research

Last month a Catholic Church in San Diego, California, put out a flier which read: ‘It is a mortal sin to vote Democrat…immediately after death the souls of those who die in a state of mortal sin descend into hell.’

Hillary Clinton had promised to uphold Roe v. Wade, whereas Trump is expected to appoint an anti-abortion judge to the U.S. Supreme Court, which could lead to it being repealed.