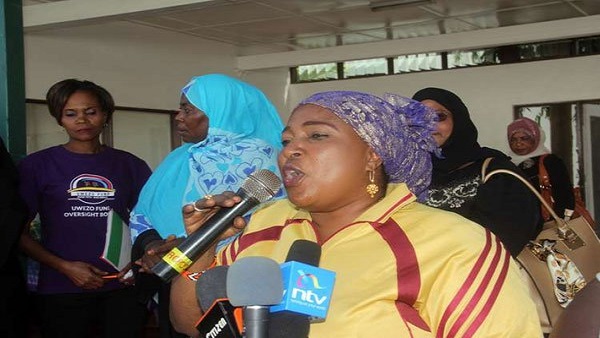 Mishi Mboko, who is married, said women should withhold sex until their menfolk present their credentials in the form of a valid voter ID card.

“Women, if your husband has not been registered as a voter, you deny him a little and tell him to go get registered and then come back and enjoy the game,” she said.

The parliamentarian was speaking in the coastal city of Mombasa on Monday at the start of a month-long nationwide drive to register millions of new voters ahead of the August 8 polls.

SEX AS A POWERFUL MOTIVATOR

She said sex was a powerful motivator and that registering in large numbers was the opposition’s best bet for beating the government of President Uhuru Kenyatta on election day.

In a similar initiative, motorcycle taxis — known as bodaboda — in the western port city of Kisumu, are refusing to carry passengers without voter IDs.

“There will be no rider to carry passengers from here if he is not registered as a voter,” said Joseph Owiti, chairman of the Kisumu Boda-Boda association.

“This election is about numbers, it is the numbers that will win, and numbers cannot just come by talking, it is about people registering as voters. That is why we are mobilising our people.”

Kenyan authorities estimate some four to six million voters have yet to register, crucial numbers that could swing the result.

In 2009 Kenyan women launched a week-long sex strike in order to protest infighting in the then unity government and force political leaders to work together for the common good.

Similar carnal boycotts have been employed by women across the globe seeking to effect change or make a point, however it is unclear how much they really work.

In 2002 Liberian Nobel Peace Prize winner Leymah Gbowee organised a sex strike in a bid to halt the war in her country.

Belgian women called for a sex strike and shaving boycott to force politicians to form a government in 2011, and Colombian women likewise in 2006 staged a strike “of crossed legs” to press gangsters to give up their guns.

In 2014 a group of Ukrainian women started a campaign called “Don’t give it to a Russian,” to protest the annexation of Crimea.