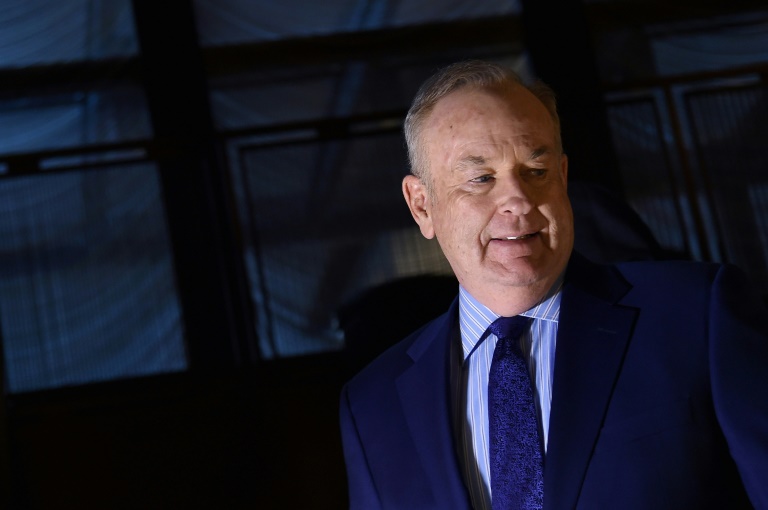 It was a humiliating blow to one of the biggest US media names, a veteran broadcaster at Fox News for two decades who counted President Donald Trump among his personal supporters and whose ratings soared in defiance of his alleged abusive behavior towards women.

But the departure of advertisers, wary of being associated with “The O’Reilly Factor,” sealed his fate as the Murdoch family, who owns parent company 21st Century Fox, battles to keep a lid on reports of harassment at the channel and eyes up a powerful merger in Britain.

“After a thorough and careful review of the allegations, the company and Bill O’Reilly have agreed that Bill O’Reilly will not be returning to the Fox News Channel,” 21st Century Fox said in one-sentence statement.

Women rights activists declared his dismissal a victory and said they hoped it would encourage victims of sexual harassment to speak out.

“To see this seismic shift in corporate culture, for a company to put woman’s rights ahead of the bottom line, this is enormous,” said Wendy Walsh, a former O’Reilly guest who made allegations against him.

“Women’s voices are finally being heard and I’m elated,” she told CNN.

The announcement came just hours after the combative and right-wing television personality was photographed shaking hands with Pope Francis in St Peters Square on holiday in Rome.

“It is tremendously disheartening that we part ways due to completely unfounded claims,” hit back the 67-year-old in a statement. “But that is the unfortunate reality many of us in the public eye must live with today.”

O’Reilly said he was proud of what he termed “one of the most successful news programs in history,” thanked his viewers and wished “only the best” for Fox News, the premier right-wing news outlet.

O’Reilly had been in the headlines constantly since a New York Times investigation revealed on April 1 that he and Fox had covered up allegations of sexual harassment against him for at least 15 years, paying five women a total of $13 million in exchange for their silence.

Commentators said his dismissal marked a defining point for Fox, struggling to clean up its image nine months after Roger Ailes, the 76-year-old former executive who built up the cable channel, resigned under a haze of similarly damaging sexual harassment accusations.

More than 50 companies yanked advertising from his show, the most popular in US cable news watched on average by 3.98 million viewers in early 2017, according to Adweek.

Not even the support of Trump — himself caught boasting of groping women and saddled with record-low approval ratings — was enough to right the ship for O’Reilly.

“This is what happens when women speak our truth — we can slay dragons,” said attorney Lisa Bloom, who represents three of the women who accused O’Reilly, insisting Fox should have fired him years ago.

Fox occupies a unique and powerful, if controversial, position in America — watched by a deep and committed conservative fan base that to a large extent includes many of those who voted Trump into office.

Built by Australian-born American media baron Rupert Murdoch two decades ago into the leading cable news channel, it has drawn praise from conservatives and vitriol from liberals.

During the Barack Obama administration, this partisanship accelerated as the network openly campaigned for Republican candidates and gave oxygen to the ultra-conservative Tea Party movement.

Some commentators pointed to a generational shift between the 86-year-old Murdoch and his adult sons James and Lachlan, who are taking on an increasingly powerful role.

Paul Janensch, a former newspaper editor and retired journalism professor at Quinnipiac University, said it came down to money.

“It’s a business and if the pushback… was going to hurt Fox’s bottom line then he’s gone,” he told AFP.

While the relationship between Trump and Fox has not always been smooth sailing, the Republican White House is having a boom effect on Fox — and indeed other television — ratings.

Eyes will now focus on O’Reilly’s replacement. During his vacation, his show was hosted by a rotating cast of substitutes, including Dana Perino, former spokeswoman for Republican president George W. Bush.

A former Nigerian Minister of State for Education, Kenneth Gbagi has sparked outrage after he was alleged to have ordered that some hotel workers...
Read more
World

A grand jury has charged one police officer over the raid which resulted in the fatal shooting of Breonna Taylor at her home in...
Read more
News

U.S. asks citizens to ‘reconsider travel to Ghana’ due to COVID-19

The United States government through its Department of State has issued Travel Advisory to American citizens planning to travel to Ghana. The U.S. embassy in...
Read more
- Advertisement -

The African Union (AU) has said that Mali's military junta must quickly appoint civilian leaders who should then manage an 18-month transition towards elections. The...
Read more
Special Reports

Gambia’s lawmakers have rejected a draft constitution to replace the 1997 constitution. The document which was to help reform the country’s governance system could not...
Read more