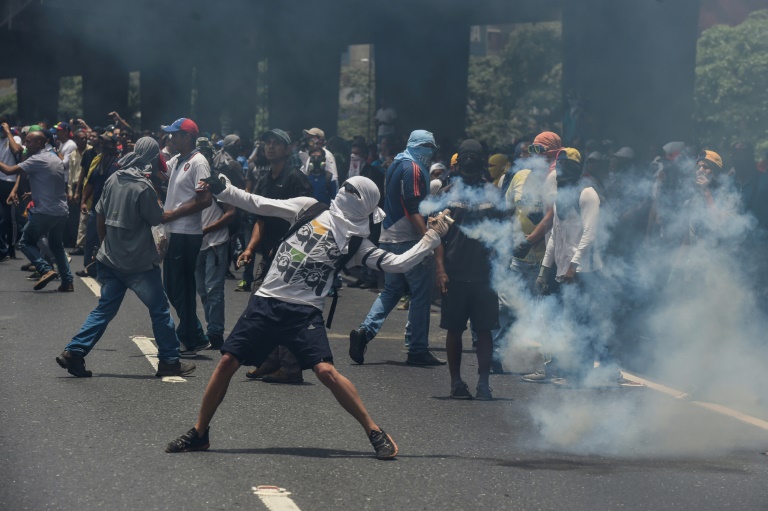 Opponents of the Venezuelan government vowed fresh huge protests on Thursday, upping the ante in their bid to oust President Nicolas Maduro after a day of deadly clashes in the oil-rich but beleaguered nation.

A 17-year-old boy and a 23-year-old woman died after being shot Wednesday during massive protests, and a soldier outside Caracas was said to have been killed, bringing to eight the number of people killed this month in a mounting political crisis.

Riot police fired tear gas to force back stone-throwing demonstrators as hundreds of thousands of people fed up with food shortages and demanding elections joined protest marches in Caracas and several other cities.

Thousands of Maduro’s supporters held a counter-rally in central Caracas.

The opposition has accused Maduro of letting state forces and gangs of armed thugs violently repress demonstrators as he resists opposition pressure for him to quit.

Some riots continued into the night, with reports of looted bakeries, supermarkets and food centers in western Caracas.

Despite Wednesday’s deadly violence, his opponents displayed their determination to ratchet up the pressure by calling for renewed protests on Thursday.

“Tomorrow even more of us have to come out.”

The 17-year-old was shot by gunmen on motorbikes who also threw tear gas canisters into a crowd of protesters, Amadeo Leiva, head of the Clinicas Caracas Hospital which treated him, told AFP.

The 23-year-old woman, Paola Ramirez, died after being shot in the head in the western city of San Cristobal, the state prosecution service said later in a statement.

Authorities had previously reported five other people killed, including a boy of 13, in protests around the country earlier this month.

Pressure on the leftist president has been mounting since 2014, as falling prices for Venezuela’s crucial oil exports have aggravated an economic crisis.

“I don’t have any food in the fridge,” said protester Jean Tovar, 32, who held rocks in his hands ready to throw at military police in Caracas.

“I have a two-year-old son to support and I am unemployed, and it is all Maduro’s fault.”

Recent moves by Maduro to tighten his grip on power and ban Capriles from politics have escalated the country’s political and economic crisis and sparked international cries of concern.

They have galvanized the often divided opposition in the recent protests in their efforts to force Maduro from power.

“We have to end this dictatorship. We’re fed up. We want elections to get Maduro out, because he’s destroyed this country,” said protester Ingrid Chacon, a 54-year-old secretary.

The president in turn has urged his supporters, the military and civilian militias to defend the socialist “Bolivarian revolution” launched by his predecessor Hugo Chavez in 1999.

“We are firmly with Maduro out of loyalty to our eternal commander” Chavez, said teacher Nancy Guzman, 50, demonstrating at Maduro’s rally on Wednesday.

The center-right opposition has called for the military — a pillar of Maduro’s power — to abandon him.

But the defense minister, General Vladimir Padrino Lopez, has pledged the army’s “unconditional loyalty” to Maduro, who has accused the opposition of inciting a “coup” backed by the United States.

In Washington on Wednesday, Secretary of State Rex Tillerson said the United States is “concerned that the government of Maduro is violating its own constitution and not allowing the opposition to have their voices heard.”

Two television channels, El Tiempo of Colombia and Todo Noticias of Argentina, said they were taken off the air in Venezuela during Wednesday’s unrest.

According to a survey by pollster Venebarometro, seven in 10 Venezuelans disapprove of Maduro, whose term does not end until 2019.

Maduro said Wednesday he was willing to face his opponents at the ballot box.

“I want to have elections soon… to seek a peaceful path so the Bolivian revolution can put the conspirators, murderers and interventionist right-wingers in their place,” he told a rally of supporters in central Caracas.