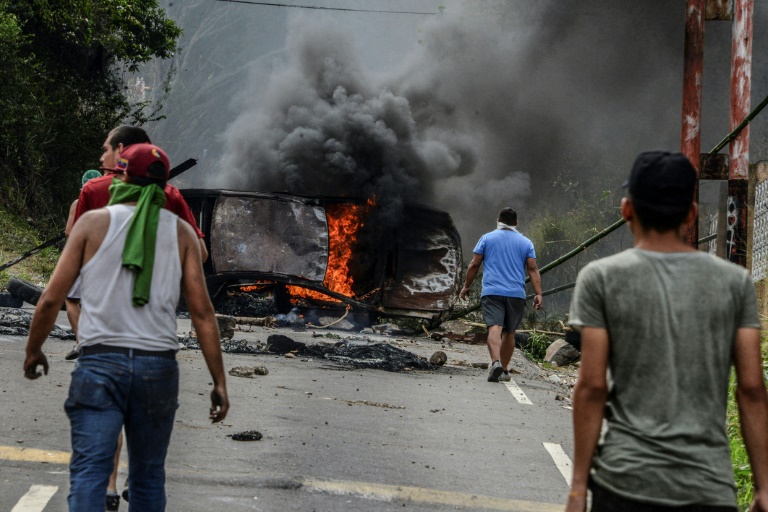 Three people were killed in Venezuela on Monday in renewed violence, raising the death toll in three weeks of massive demonstrations against leftwing President Nicolas Maduro to 24, officials said.

Several others were seriously injured and “between life and death,” said public defender Tarek William Saab.

Two government trucks in eastern Caracas were set alight on a freeway by masked protesters who poured oil on the road. Police nearby did not immediately intervene, AFP journalists saw.

Elsewhere in the capital, riot police fired tear gas at another group of protesters who threw stones at them.

However, the majority of demonstrators, who numbered in the thousands, rallied peacefully.

The return to violence in the streets of Venezuela after a weekend lull was certain to further stoke international concern over the country, whose economy is imploding despite vast oil reserves.

Latin American countries and the United States have voiced concern at the unrest.

The population is suffering shortages of food, medicine and basic supplies. Riots and looting have occurred in several places.

The conservative-led opposition says government incompetence is to blame and calls the elected president a dictator. It wants early elections.

But Maduro, who has the backing of the armed forces, says Venezuela is the victim of a US-led capitalist plot.

He has stepped up a nationalization drive started by his late Socialist predecessor Hugo Chavez that has swept up plants and assets of foreign companies, including American ones.

Authorities have also curbed the power of the National Assembly, which is dominated by opposition lawmakers.

The three deaths on Monday happened in western Venezuela.

Saab said one man in the city of Merida, a university city in the Andes, “was demonstrating peacefully when he apparently received a gunshot”.

He said in a television interview that the slain man was a pro-government demonstrator, and added that five other people were also badly wounded in clashes.

Later, a second man was killed also in Merida. It was not clear if the victim was a protester or a pro-government marcher.

The third man killed was in the nearby town of Barinas, a source in the prosecutor’s office told AFP.

The source did not specify whether he was an anti-Maduro protester or a pro-government activist.

But an opposition party, Justice First, said the man was in an anti-Maduro demonstration that was targeted by pro-government “paramilitaries”. It said two other people were wounded.

The government has ruled out a presidential election this year, maintaining that Maduro will see out his term into 2018. Elections for regional governors due in December have been postponed.

Maduro said Sunday he wanted the regional elections “now” but did not indicate a possible date for those or local ballots that are due this year.

“I am ready for whatever the electoral authorities say,” he insisted.

The courts and electoral authorities have fended off efforts to remove Maduro since the opposition took over the legislature in January 2016.

Analysts say street protests are now one of the few levers the opposition has for change.

“We are taking a stand so that Maduro knows he has to go,” said Amalia Duran, a housewife of 41 who joined thousands of protesters under a scorching sun in Caracas. Many dressed in white and waved Venezuela’s red, yellow and blue flag.

“We are hungry because of him,” she said of the president. “I can’t find milk for my 16-month-old baby.”

“I have come because I am tired of this. I went round 20 pharmacies looking for a simple antibiotic,” said Yorwin Ruiz, 26.

“We cannot go on like this. I hope we at least manage to have elections.”

The captain of Venezuela’s national football team, Tomas Rincon, joined other sports figures to appealing for an end to the crisis.

“No more repression!” he wrote on Twitter, offering himself “to be a driving force in the rebirth of our country.”

Miguel Cabrera, a major league baseball player, wrote on Instagram that his native country was “killing itself and those who have power in Venezuela are unable to do anything.”

Maduro won the 2013 election by a narrow margin over opposition candidate Henrique Capriles. But Maduro’s popularity has since dropped.

A recent survey by pollster Venebarometro indicated that seven out of 10 Venezuelans disapprove of Maduro.

The government and the opposition have traded blame for the deadly violence, with each side accusing the other of trying to mount a “coup”.

“Peaceful protests across the country will continue until Mr Maduro respects the constitution and ends his internal coup,” Capriles tweeted Monday.

“If there is no answer from Maduro’s corrupt drug-trafficking leadership, at the end of the day we will announce further action.”