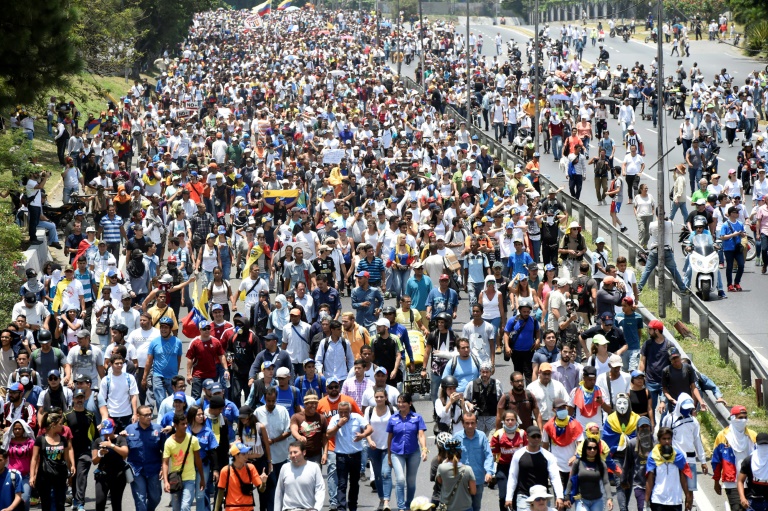 Venezuela says it is quitting the Organization of American States in anger at pressure from the bloc over the government’s handling of a deadly political crisis.

Echoed by the United States and European Union, the OAS has led an international chorus of concern over the economic and political chaos in the major oil-exporting country.

Bristling at the pressure, Venezuelan Foreign Minister Delcy Rodriguez said late Wednesday the government would launch a two-year process to pull out of the Washington-based regional diplomatic grouping.

On Thursday, “we will present a letter of complaint to the OAS and we will begin a process that will take 24 months,” she said in a televised address.

She branded the OAS an “interventionist coalition” led by Washington.

A defiant President Nicolas Maduro tweeted “I’m calling for the people’s civic-military unity in this battle for independence and peace for our country.”

On Wednesday, the permanent council of the 35-nation OAS agreed to hold a meeting of their foreign ministers to discuss the crisis — a decision Venezuela had forewarned would prompt it to exit.

The OAS has voiced concern about the state of democracy in Venezuela, where Maduro is resisting opposition pressure to remove him from office.

So far this month, 28 people have been killed in anti-government protests that have erupted into clashes with riot police, the attorney general’s department says.

Venezuela has suffered an economic collapse fueled by a plunge in international prices for its crucial oil exports.

Maduro says the shortages and the protests are part of a US-backed plot to topple him.

He said lawmakers would hold a session on proposals to “rescue democracy” and then march to where one of the latest casualties died in eastern Caracas.

Children were evacuated from a school to escape tear gas, with teachers holding handkerchiefs over the pupils’ faces.

Interior Minister Nestor Reverol tweeted that two soldiers were wounded in Caracas by armed men on motorbikes who he said were “contracted by the terrorist rightwing.”

“We call on the opposition to leave the path of violence,” said one of his supporters, Freddy Gutierrez.

The opposition blames Maduro for severe shortages of food, medicine and other essentials in the oil-rich country.

It wants general elections to rescue the country from the crisis and is holding the regular demonstrations to press that demand.

“I want to die in a Venezuela that is free of dictatorship,” one protester, Elizabeth Freites, 77, told AFP.

“I have been protesting for nearly a month and I am going to continue until we get out of this situation.”

A recent survey by pollster Venebarometro indicated that seven out of 10 Venezuelans were opposed to Maduro.

The opposition and government accuse each other of stirring up violence in the protests.

In just under a month of unrest, more than 400 people have been injured, and nearly 1,300 arrested, the attorney general said.

That includes 14 arrested journalists, their union said Tuesday. More than 100 journalists have been assaulted while covering the protests, it added.

Rights group Amnesty International urged the government to stop the “persecution” and “arbitrary detention” of protesters.