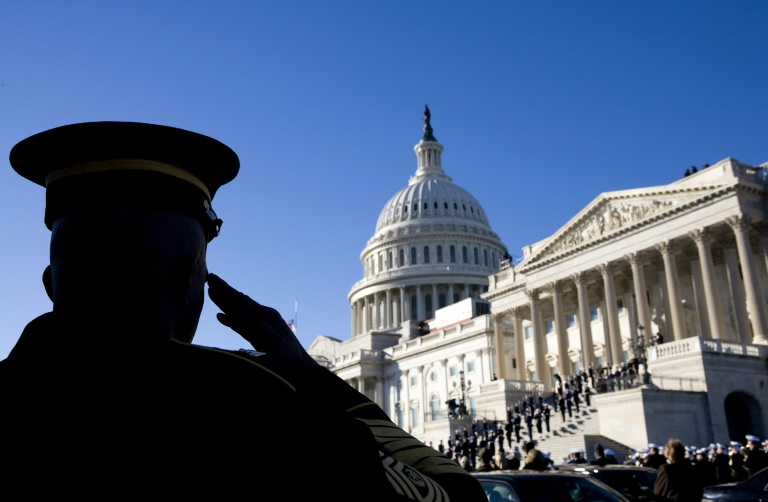 Transgender personnel barred from US military

Transgender personnel barred from US military

Trump's announcement banning transgender people from serving in the US military was a stunning reversal from Obama-era policies. Photo: AFP

President Donald Trump announced Wednesday that transgender people may not serve “in any capacity” in the US military, upending a key policy from Barack Obama’s administration and drawing swift condemnation.

Announcing the major policy change on Twitter, Trump said the military should be focused on “overwhelming victory,” and not burdened with the “tremendous” medical costs and disruptions that transgender personnel would entail.

“After consultation with my generals and military experts, please be advised that the United States Government will not accept or allow transgender individuals to serve in any capacity in the US Military,” Trump tweeted.

The announcement served as a stunning reversal for the military, which has been working with military heads to implement an Obama-era plan to start accepting transgender recruits.

The previous policy also allowed trans troops already serving to do so openly.

“The decision is based on a military decision. It’s not meant to be anything more than that,” Sanders said.

She did not provide additional details to Trump’s bare-bones Twitter announcement.

Defense Secretary Jim Mattis, currently on vacation, only learned of Trump’s decision Tuesday after he announced it.

When pressed on the extent to which Trump consulted with him or the Pentagon, Davis said: “This was something that was the product of consultation.”

Trump’s announcement left unanswered a slew of questions, including whether transgender personnel currently serving may soon face getting booted from the military.

Sanders said the Pentagon and the White House would work on the matter together and would “lawfully determine” next steps.

Estimates of transgender troop numbers vary widely. A much-cited Rand Corporation study in 2016 found there are between 1,320 and 6,630 among the 1.3 million active duty service members.

But rights groups say there are about 15,000 active transgender troops.

The Rand study said that only a small portion of service members would ever seek gender transition affecting their deployability or health costs, adding between $2.4 million and $8.4 million to the Pentagon’s vast budget.

“When you have this (gender reassignment) surgery, you can’t be deployed for almost 300 days and somebody else has to go in your place,” Hartzler told CNN.

Transgender rights in America have increasingly been in the spotlight in recent months, especially over how states regulate the use of public restrooms.

The Trump administration has faced protests after it reversed Obama-era federal protections urging schools to allow transgender students to use the bathroom corresponding to their gender identity, not the gender on their birth certificate.

Trump’s announcement drew a broad backlash, with former vice president Joe Biden saying “every patriotic American who is qualified to serve in our military should be able to serve.”

Ash Carter, who was Obama’s last defense secretary and oversaw the policy shift allowing transgender troops to enlist and serve openly, said the decision would send “the wrong signal” to potential new recruits.

“What matters in choosing those who serve is that they are best qualified. To choose service members on other grounds than military qualifications is social policy and has no place in our military,” Carter said.

“Any American who meets current medical and readiness standards should be allowed to continue serving,” McCain said.

At least 18 countries already allow transgender personnel to serve openly in their militaries, including Britain, Israel and Australia.

Perhaps the most famous transgender US soldier is former Army intelligence analyst Chelsea Manning, who served seven years in prison for one of the largest dumps of classified documents in US history.

During her incarceration in military prison, Manning battled for — and won — the right to start hormone treatment.

Manning, who is still employed by the Army and retains its insurance coverage, has become an icon for transgender activists.

“So, biggest baddest most $$ military on earth cries about a few trans people but funds the F-35? Sounds like cowardice,” Manning tweeted after Trump’s announcement, referring to the US military’s most expensive, state-of-the-art warplane.

Retired Navy SEAL Kristin Beck, who came out as transgender after spending 20 years with the elite commandos, challenged Trump.

“Let’s meet face to face and you tell me I’m not worthy,” Beck told Business Insider.