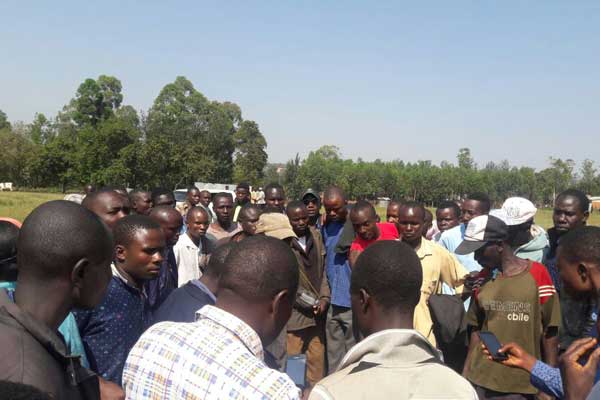 Onlookers look at the body of a man who was shot dead by a police officer outside a tallying centre in South Mugirango on August 9, 2017. PHOTO | CALVIN NYABUTO | NATION MEDIA GROUP

One person has been shot dead by a police officer in Kenya’s Kisii County at a center meant for vote tallying in South Mugirango constituency.

Daily Nation reported on Wednesday that an eye witness said the man was shot from the back.

“Our colleague was killed in broad day light for no good reason,” the eyewitness said.

“We are probing the circumstances which lead to the death of the man. We will inform the public in due course,” he said.

The eyewitness who spoke to Daily Nation said said she watched as the police officer shot the young man.

“I am still in shock. I saw it happen. Some two boys were fighting. The victim had tried to separate them, but he officer threw a teargas canister walked to him and shot him,” she said.

Meanwhile Kenya’s opposition presidential candidate Raila Odinga on Wednesday said the electoral commission’s IT system has been hacked to manipulate the election results.

He has already rejected results announced so far which puts his rival President Uhuru Kenyatta in a strong lead.

Reacting to the claims by Mr. Odinga, Kenya’s election boss Wafula Chebukati said there is no indication yet that the commission’s system has been hacked.

There are fears of a repeat of violence 10 years ago when over 1,100 Kenyans died over disputed election results.