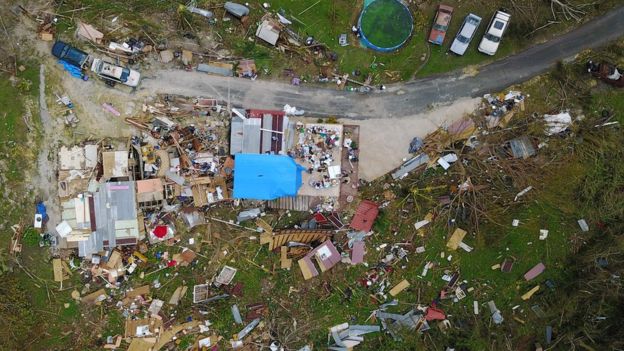 US President Donald Trump has defended his response to the disaster in Puerto Rico, which has been ravaged by Hurricane Irma and Hurricane Maria.

Much of the US island territory has lost power, while residents say they are running low on medicines and food.

Critics have accused Mr Trump of being slow to respond, and of showing more concern for Texas and Florida after they were hit by hurricanes.

Mr Trump has announced he will visit Puerto Rico next week.

“That island was hit as hard as you can hit,” he said, adding the US was sending food, water and supplies on “an hourly basis” to the island.

It tore through the island as one of the most powerful storms in nearly 90 years.

About 44% of the 3.5 million residents living on the island are still without clean drinking water six days after the storm barrelled through, the Defence Department said on Tuesday.

The mayor of San Juan, Puerto Rico’s capital, told the BBC the island was “in a humanitarian crisis”.

“Our hospitals have no diesel. And of course no diesel means no life support systems,” Carmen Yulin Cruz said.

“People that are dependent on diesel in order to breathe are running out of diesel or their batteries are running out. So they’re really fighting life or death situations.”

Gerardo Torres, a doctor in San Juan, told the BBC that “operating rooms are closed due to lack of air conditioning and operating kits cannot be sterilised”.