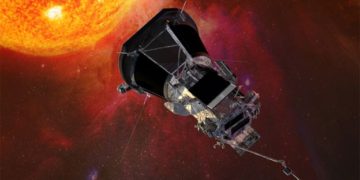 The probe is set to become the fastest-moving manmade object in history. Its data promises to crack longstanding mysteries about the Sun's behaviour.

US space agency Nasa has launched its mission to send a satellite closer to the Sun than any before.

The probe is set to become the fastest-moving manmade object in history. Its data promises to crack longstanding mysteries about the Sun’s behaviour.

It is the first space craft to be named after a living person – astrophysicist Eugene Parker, 91, who first described solar wind in 1958.

“Wow, here we go! We’re in for some learning over the next several years,” he said after watching the lift-off from the scene. The University of Chicago professor said he had been biting his nails in anticipation.

It came after a failed attempt the previous day, when a last-minute alarm caused the agency to miss its 65-minute weather window.

Just under an hour after the launch, Nasa confirmed that the spacecraft had successfully separated and the probe had been released into space.

What will the probe do?

The probe aims to dip directly into our star’s outer atmosphere, or corona.

It will zip past Venus in six weeks and make a first rendezvous with the Sun a further six weeks after that.

Over the course of seven years, Parker will make 24 loops around our star to study the physics of the corona, the place where much of the important activity that affects the Earth seems to originate.

The probe will dip inside this tenuous atmosphere, sampling conditions, and getting to just 6.16 million km (3.83 million miles) from the Sun’s broiling “surface”.

“I realise that might not sound that close, but imagine the Sun and the Earth were a metre apart. Parker Solar Probe would be just 4cm away from the Sun,” explained Dr Nicky Fox, the British-born project scientist who is affiliated to the Johns Hopkins Applied Physics Laboratory.