Ghana battles open defecation with many homes still without toilets 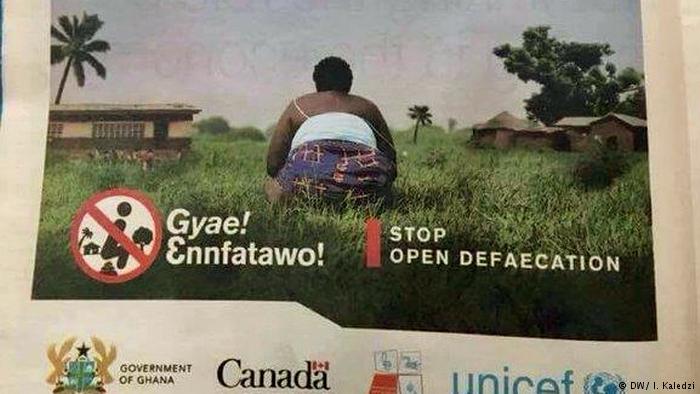 Ghana is well known for its natural resources like Gold and Cocoa, a fragile but stable democracy, peaceful communities and a population that is largely friendly.

Many houses across the country are without toilets. To have houses built without toilet facilities means residents have to find options outside their homes to defecate.

With little options available many of them defecate in the open, in drains and along beaches.

An estimated 5.7 million people according to findings from global NGO, Water Aid engage in open defecation due to lack of toilets.

No toilets in many homes in Accra

In a community called Accra New Town, one resident Bernice Ofei revealed to Africa Feeds that she always goes out of her home in search of a place of convenience.

She said “You know in reality, every house is supposed to have its toilet. But you know our people, how they build their houses, they didn’t locate any toilets in their house. When somebody wants to go for nature call, there is no place and people have been easing around by heart.”

Ofei is not alone in this frustration. Another resident, Nana Abena said in some instances going to nearby bushes and using polythene bags are the options available.

She angrily told Africa Feeds that “the only option for many is to go to the bush to defecate. Some had to use toilets in homes of neighbours. For many they defecate in polythene bags and you can see them littering the community.”

Public toilets have been built in some communities in Ghana, but not many to serve the huge populations in some areas.

That means residents staying far away from such public toilets according to Simon Keelson, a resident are forced to defecate around endangering their health.

“Some of the children you see that they defecate in the polythene bags and they throw it where ever they like. It is a worry because at times we know that the toilet is not good. At times they can attract flies, we can easily get diseases like cholera and others,” Keelson added.

Majority of these public toilets are always in bad state and pose health threats. Many Ghanaians appreciate the health threats associated with not having toilet facilities at home and important public places.

In spite of that there is very little progress being made by Ghana to reduce the rate at which people defecate in the open. Environmentalists and sanitation experts are worried and fear the worsts.

Attah Arhin is vice chairman of the coalition of NGOs in water and Sanitation in Ghana simple called CONIWAS.

He told Africa Feeds “Open defecation is a very serious threat to child wellbeing and to maternal health. In fact 19 percent of Ghanaians defecate in the open on a daily basis. And this is very serious. There are many houses without toilet facilities. And so people prefer to go beaches to open spaces and all that.”

Some district assemblies in Ghana have been pushing for households to put up their own toilets or risk prosecution. The Accra Metropolitan Assembly that oversees the capital is one of those assemblies.

But it is costly for many residents to build toilets. Lack of supervision and political will mean such initiatives hardly get enforced.

Ghana’s government is however worried about the impact of the current trend on the country’s tourism sector. Many beaches are being abandoned by tourists due to the amount of faeces found there.

Catherine Afeku who is tourism minister says stopping open defecation along the beaches is a major priority.

“We came on a tour, to ascertain for ourselves, the state of the open defecation issue. We have to re-enforce the commitment to fight this menace. It can’t be something that we leave it and say that is just the attitude, nobody was born with this upbringing. Those who are in charge of the dungeons and the forts along the coast they will be very pivotal in ensuring that this canker is eliminated,” she said.

Sanitation experts are now getting support from media organizations to force the government to invest more in sanitation issues. Arhin is hoping ongoing advocacy will bring about change.

“As a country we invest very little into sanitation. Our budget for sanitation is just about 0.5 percent, in fact less of our total budget, annual budget, we believe that with advocacy, if we keep on hammering on the point and the importance of sanitation, government may listen,” Arhin added.

Justice Adoboe, the coordinator for the largest group of local journalists in Ghana that covers water and sanitation issues called the Ghana Watsan Journalists Network (GWJN) says the advocacy has become very crucial at this stage of Ghana’s development.

He said the journalists “realized that over the years that there have been laws passed by our Assamblies and by national government to ensure that people have descent places of convenience. But these laws are not implemented.

The situation is even worst in schools were children are forced out of school due to lack of toilets. This makes the situation dire requiring serious redress to prevent a major health hazard in many communities.