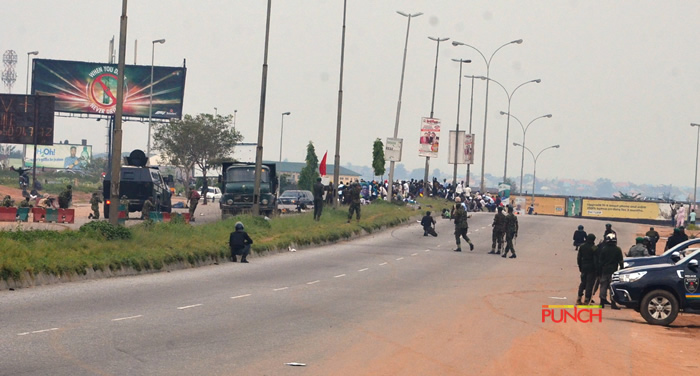 The Nigerian army has justifies shooting into some Muslim protesters. The army clashed with the protesters over the past days resulting in the death of some 42 people.

The Muslim Shi’ite group on Wednesday said 42 of its members were killed when security forces fired at them during a protest in the capital Abuja.

The protesters belonging to the Islamic Movement of Nigeria (IMN) demanded the release of Ibrahim Zakzaky, jailed since December 2015.

Zakzaky was arrested when security forces reportedly killed hundreds of his followers  in a crackdown on the group.

A court has ruled that the continuous detention of Zakzaky without charge was illegal. The protesters say he must be released immediately.

Amnesty International has condemned the Nigerian Army for what it says were acts designed to kill the protesters.

“In many encounters with the Islamic Movement of Nigeria’s members, soldiers applied tactics designed to kill and neutralise an enemy, rather than to ensure public order,” the rights group said.

The Nigerian army in response to the accusations posted a video of US president Donald Trump. In the video Mr. Trump backed the use of force against migrants throwing stones at the military.

“Not only did they use stones but they were carrying petrol bombs, machetes and knives, so yes, we consider them as being armed.

We intervened only because the IMN [Islamic Movement of Nigeria] members are trying to harm our people, they are always meeting us… at security check points and trying to provoke us, they even burned a police vehicle,” Agim is quoted as saying.