Ghana: Burkinabe arrested with a gun in church 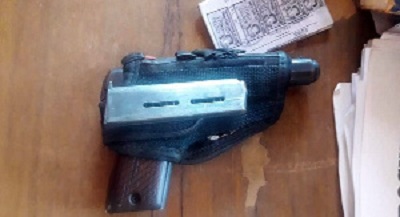 Police officers stationed at Ghana’s border to Burkina Faso have arrested a Burkinabe man with a loaded handgun during a Church service on Sunday.

The 55-year-old suspect was arrested after members of the Hamile Roman Catholic Church in northern Ghana raised alarm about his suspicious behaviour.

The arrest comes in the wake of fears of terror attacks in the sub-region as Burkinabe refugees migrate to Ghana and other countries.

In May, four persons were killed in an attack on a Catholic church in northern Burkina Faso, marking the latest in a string of assaults on Christian places of worship.

According to the crime officer of the Jirapa Municipal Police Command, DSP Richard Dapilah communities like Hamile were wary of terror threats following recent trends.

He said “We have placed them all on high alert because of the attacks in Burkina Faso and other Sahel countries”.

DSP Dapilah said during interrogation, the suspect said he licensed the gun in Burkina Faso.

“He showed us the documents. We are holding him currently for possessing a firearm without authority,” Dapilah said.

The suspect is being investigated to be processed for court, according to police officials.

There have been suggestions by the police for bags to be banned in churches in the wake of the fears of terror attacks.

Ghana’s security chiefs have also met the leadership of the Christian community in Ghana to discuss how to enhance security at churches.