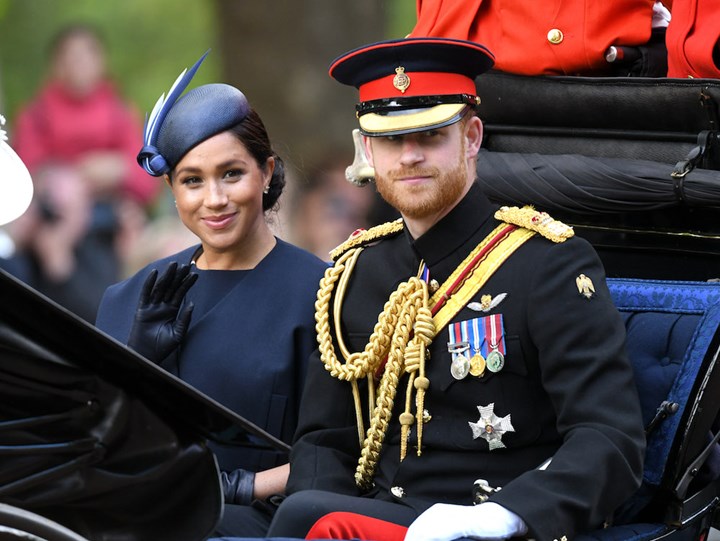 Thousands of royal fans gathered for this year’s Trooping the Colour, as the Queen officially celebrated her 93rd birthday.

But as the royal family assembled on the balcony at Buckingham Palace for the hugely anticipated photo, their smiles were masking stress, worry and panic as the palace is rocked by scandal, not for the first time.

The usually happy occasion was overshadowed by rumours that new dad Prince Harry had reportedly dated a model after he had met his now wife, former actress Meghan Markle.

Meghan – who made her first appearance since introducing royal baby Archie Harrison to the world – seemed to be putting on a very brave face, as she stood by her man.

But with claims that Harry “hit it off” with Burberry model Sarah Ann Macklin after he had met Meghan hitting the headlines, the Duchess of Sussex was most likely furious with the allegations being made public.

Royal biographer and author of Harry: Conversations with the Prince, Angela Levin, told The Express: “During the very early stages of his relationship with Meghan, Harry was thought to have gone on dates with Sarah Ann Macklin.

“They met at a private party, he took her number and bombarded her with texts. But it turned out to be just a fling.”

An alleged friend of Sarah said the pair got along but were “quite different” so it didn’t work out between them. Of course, we know for certain nothing progressed with the model, as Harry went on to marry American actress Meghan in May 2018.

But the duchess, who took time off from maternity leave to attend the special occasion, would have been left bitterly disappointed, as her appearance was overshadowed by the sordid allegations.

Body language expert Dr Louise Maher tells New Idea that behind the smiles and waves, tension was brewing among the royals.

Fans also seem to have noticed the tension play out at the event, with some taking to social media to express concern for the duke, who appeared worn out. “Harry looks really miserable,” one royal watcher shared on Instagram.

Meanwhile, Camilla – the wife of Prince Charles – is said to have been trying to ignore the squabbling around her. “Camilla was disinterested,” Dr Maher adds. “She was spying through semi-closed and angular eyes towards Meghan. This did not look like fun.”

But Harry’s former flame wasn’t the only news that rocked Kensington Palace. During the event, news that Kate Middleton’s former best friend Rose Hanbury had reportedly split from her husband David Rocksavage was also circling the family.

The 35-year-old, who married in 2009, was recently spotted without her wedding ring while attending the state banquet with the royals and Donald Trump. The Express newspaper reported: “Rose usually wears a wedding band but opted to go without for the black-tie banquet.

“Her husband was also at the event in his official capacity as Lord Great Chamberlain, although they appeared to arrive separately and weren’t photographed together.” It comes just months after rumours emerged of her fall out with the Duchess of Cambridge following unsubstantiated reports the former model had an affair with Prince William.

Despite being at the same event and in the same room, Kate – who ‘phased’ Rose out of her friendship circle – did not acknowledge her presence.

“They should be really close but things are tense between them,” a source told The Sun, adding, “No-one can understand quite how things have come to this”.

No Ebola in Kenya after earlier scare