African chef Selassie Atadika has made it to the final 10 of the €100,000 Basque Culinary World Prize.

Chefs representing ten different countries were named on Friday as top ten finalists for the Basque Culinary World Prize 2019, an award for trailblazing chefs whose work has had an impact “beyond the kitchen”.

For three months earlier this year, gastronomic professionals and institutions nominated chefs from around the globe, known and unknown, who demonstrated how gastronomy could become a transformational force in areas such as technology, education, environment, health, food production or on social or economic development.

In this 4th edition of the prize– which is organised and promoted by the Basque Government under the Euskadi-Basque Country Strategy and the Basque Culinary Center (BCC), the world’s leading gastronomic research and teaching institution–230 nominations were received from 42 countries (a total of 150 chefs nominated), making it the edition of the prize with the widest participation to date.

Atadika, who used to work in the UN and grew up in the US, has introduced Ghanaians, and the international culinary world, to what she calls New African cuisine.

It is a menu defined by both remembrance and vision, drawing inspiration from the diet of the nomadic Fulani people, whose plant- and grain-based food travelled with them across the African continent.

And to honour the matrilineal heritage of the Ghanaian kitchen, Atadika employs a staff of all women at her restaurant in Accra, Midunu.

Midunu—meaning “come, let’s eat,” in Ewe—aims to take diners along on a journey of celebration across West Africa’s diverse culinary traditions.

Meals at Midunu are gatherings, and guests interact with one another as they share dishes around the table.

On making it to the top 10 list, Selassie Atadika, who runs restaurant Midunu in Accra said,” We try to dispel the myths that the cuisines of the continent are one note and unrefined.

We also try to highlight the diversity and history behind it. For such a massive continent there is so little known about the cuisine. We offer a gateway to the journey to one of the last culinary frontiers.” 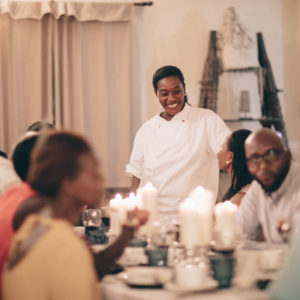 Bittor Oroz, Basque Government Deputy Minister for Agriculture, Fishing and Food Policy, commented “This fourth Basque Culinary World Prize is necessary to consolidate and continue promoting the values of excellence, commitment, quality and dedication to transformation pursued by the award.

Within the framework of the comprehensive Euskadi-Basque Country strategy, the Basque Culinary World Prize has contributed to the Basque Country continuing to be an international benchmark for excellence in gastronomy and presenting itself as a country with an exemplary model of quality of life and social cohesion, and an innovative and competitive territory”.

Joxe Mari Aizega, General Director of the Basque Culinary Center, for his part pointed out that “Professionals and institutions in the gastronomic sector from different parts of the planet have participated, helping us to discover a great variety of inspiring personalities, whose work demonstrates the social impact of gastronomy when it is part of a broad and diverse movement.

In its fourth year, the Basque Culinary World Prize confirms its importance with the highest level of participation and involvement to date, more nominations and greater scope, and above all, with the consolidation of a multiplier effect”.