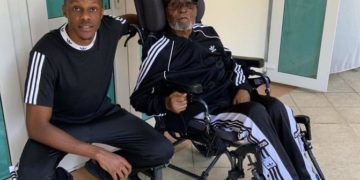 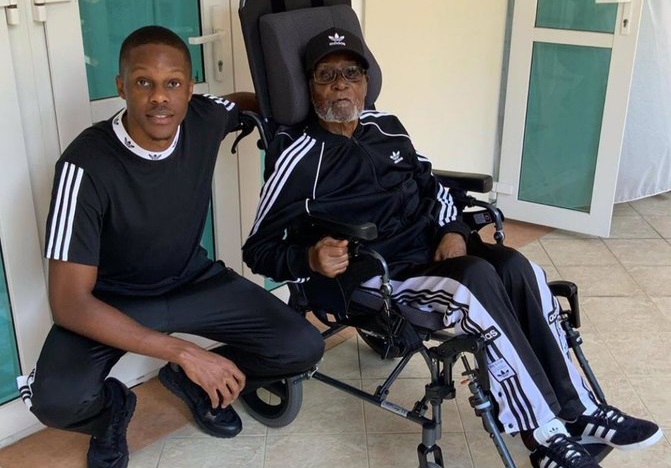 Robert Mugabe in a photograph with his son Robert Junior

There are tons of reactions on social media after former President of Zimbabwe, Robert Mugabe was seen dressed like an American hip-pop ‘rapper’.

The 95 year old former leader can be seen in a picture circulating on social media sitting in a wheelchair.

Posing with his son for a photograph moment on Friday, Mugabe was dressed in an Adidas truck suit.

The 27-year-old Robert Junior is a basketball player for the Zimbabwe national team.

He posted the picture on Instagram with the caption “Hot boys up 20 in the fourth quarter.”

The Pan-African is not known to dress in such a manner and that left many wondering if indeed he is the one.

Reactions have been flooding Social media platforms about the photograph.

This is the trouble with black people when you’re getting old. Everybody wants to fuck around & make you their toy. Look at Mugabe, niggaz keep putting him in rip-off sweat pants like they’re about to put him in the game. Fucking disrespectful. pic.twitter.com/TNo1rNbyUE

What if Mugabe is face apping….🤔🤔

A Mugabe relative is quoted by Zimlive as saying that “Of all Mugabe’s children, he’s the one who has spent the most time with his father. He has been a rock to the former president”.

The former Zimbabwe strongman, resigned from office after a military takeover in 2017. He was in power for over three decades.

How an app is making roads safer for users in Ghana