Over 60 people killed in fuel tanker explosion in Tanzania 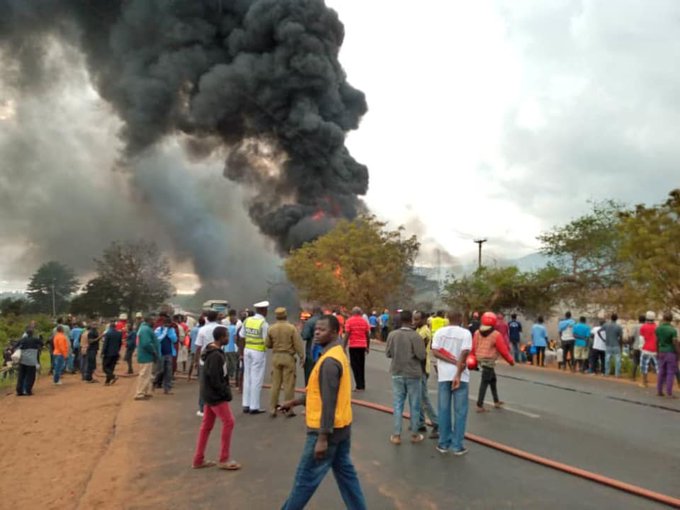 A fuel tanker explosion in Tanzania has killed at least 60 people.

Over 60 others have sustained severe injuries after the tanker exploded in the town of Morogoro, around 120 miles west of the capital Dar es Salaam.

Reports say residents were trying to siphon fuel from the vehicle, which had overturned when the blast happened.

A witness, Daniel Ngogo told Reuters “The situation is really bad. Many people died, here even those who were not stealing fuel because this is a busy place.”

Ngogo adds that “The fire was huge and it was challenging to rescue victims. I have seen about 65 to 70 people being rescued because the fire was fast spreading across the accident area.”

Regional police commissioner Steven Kabwe told local Azam TV that many of the victims are being treated for burns.

A government spokesperson Hassan Abbasi tweeted about the incident.

“We have been saddened by reports of an accident involving a fuel truck in Morogoro, which caught fire and burned several people.”

Disturbing images from the explosion have been widely circulated on social media.

#Breaking: A damaged tanker truck exploded in eastern Tanzania Saturday as people were trying to siphon fuel out of it, killing 57.

Regional police commissioner Steven Kabwe said many other people suffered burns in the explosion in the town of Morogoro. https://t.co/4abnABzqow pic.twitter.com/2xIMqLkjAM

There are also fears that the death toll will rise.

JUCo community mourns with all those whose beloved ones have died following the fuel tanker explosion at Msamvu, Morogoro.
May the all souls enjoy eternal joy, amen.#JUCo #QualityEducation #Morogoro #Tanzania #RIP pic.twitter.com/UnVjmxyrga

In May this year over 58 people were also killed in a fuel tanker explosion in Niger.