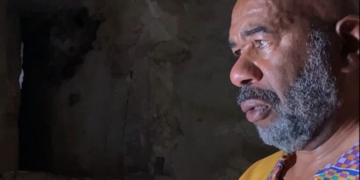 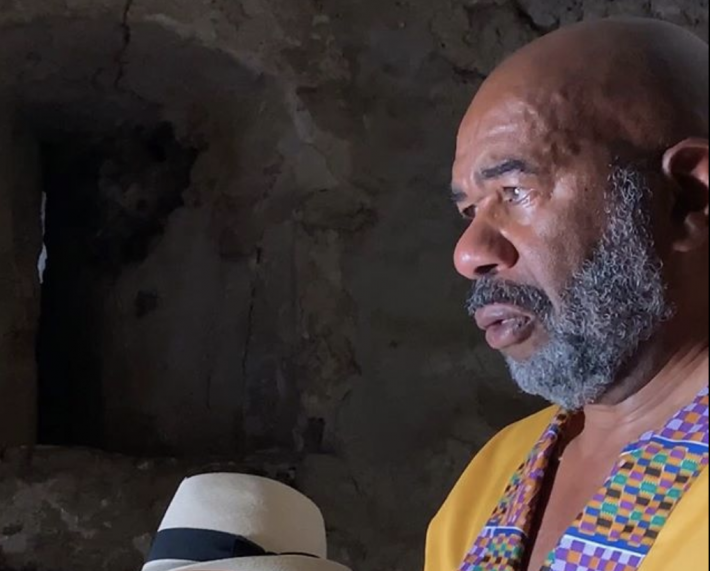 American comedy sensation Steve Harvey who visited Ghana for holiday was on Saturday moved to tears after a visit to the country’s Elmina Castle, central of the country.

The Castle built by the Portuguese once hosted slaves who were shipped to America and Europe 400 years ago.

The 62-year-old Family Feud host was joined by his family at the site of the historical atrocities.

Mr. Harvey and his wife emerged from a small dungeon where their ancestors were kept in a very inhumane conditions before saying goodbye to Africa into slavery.

The small dungeon with no windows has a door described as “door of no return”. This is where slaves were finally loaded onto ships to set sail.

The horror stories behind the Castle brought tears to Steve Harvey and the wife.

Steve and his family explored the cramped spaces where slaves were kept in a very deplorable conditions before being shipped away.

Steve, his wife Marjorie Bridges and their children had the rare opportunity of trying on original shackles used for prisoners who were kept in the dungeon.

Marjorie also had teary eyes after coming face to face with the ordeal her ancestors went through about 400 years ago. Steve Harvey couldn’t hide his emotions after the encounter as well.

“This was real pain I felt going back to Ghana’s slave castles…I could feel my ancestors on me… Powerful beyond words that I can explain. I encourage as many of you as possible to go HOME for your ancestors. Their strength is in each of us and we must honor their ultimate sacrifice in all that we do.

This was real pain I felt going back to Ghana’s slave castles…I could feel my ancestors on me… Powerful beyond words that I can explain. #TheYearofTheReturn pic.twitter.com/RYYtmK0LrG

Steve and his family are in Ghana for the #YearofReturn declaration by Ghana’s President Nana Akufo-Addo for Africans in the diaspora to return to the continent and Ghana specifically to commemorate 400 years since the first set of slaves left the shores of Africa across the Atlantic to America.

Steve Harvey is one of many Hollywood Superstars who have made the journey back to Ghana since the declaration.

American model, reality television star and actress Cynthia Bailey, Real Estates Mogul Jay Morrison, Fox Sports host, Mike Hill, radio host Ebro Darden and a host of other stars have also been to Ghana months ago for the #FullCircle festival as part of the #YearofReturn.

A few weeks ago Speaker of US Congress Nancy Patricia Pelosi led a delegation of Black Congressional Caucus including Minnesota Congresswoman Ilhan Omar to Ghana who also visited the slave castles in the Central Region.

In 2009, then sitting US President Barack Obama, the first lady and children paid a historic visit to the same Castle to connect with their heritage.

At least nine killed in fuel tanker explosion in Uganda

Waiter shot dead for being too slow in serving a customer