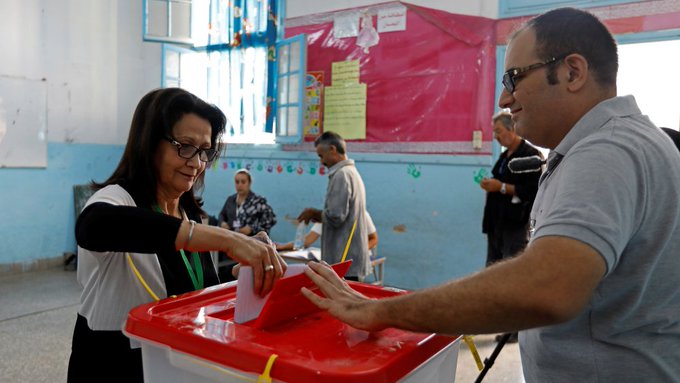 Tunisians started voting on Sunday in legislative elections weeks after voting in the first round of presidential election.

A second round of voting in the presidential election will take place on October 13 and will be contested by two political outsiders – independent academic Kais Saied and jailed media mogul Nabil Karoui.

Sunday’s parliamentary elections could decide whether Tunisians are gradually breaking away from established political parties or otherwise.

Some 15,000 candidates running on party lists or as independents are vying for seats in the 217-seat parliament.

Registered voters are about 7.2 million. Tunisia is the birthplace of the 2011 Arab Spring revolts.

Tunisians headed to the polls Sunday for the third round of legislative elections since the country’s 2011 revolution, weeks after a presidential vote swept aside the post-Arab Spring political establishment https://t.co/TVXKYnVUj2 #TunisiaDecides pic.twitter.com/br5DhR7pcq

The country is currently struggling to deal with a worsening economic crisis compounded by social unrest.

#Tunisians began voting on Sunday for a parliament !

a voter : “After the revolution, we were all optimistic & our hopes were high. But hope has been greatly diminished now as a result of the disastrous performance of the rulers & the former parliament.”#Tunisia #tunisiavotes pic.twitter.com/YhXRtsrkTm

The party that wins majority in Parliament nominates the prime minister, who then forms a government that shapes most domestic policy.

But winner of the presidential election directly controls foreign and defence policy.