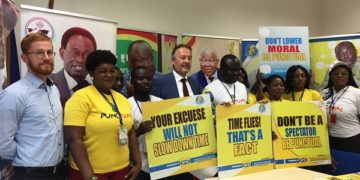 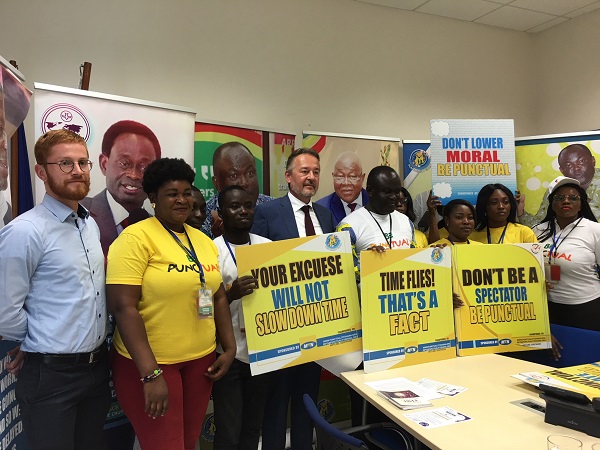 The German ambassador with some of the punctuality campaigners. Photo: Africa Feeds Media

Ghana is seeking to instill discipline and timekeeping at all places in citizens with the launch of a Punctuality campaign.

Spearheaded by the Punctuality Ghana Foundation the campaign is hoping to get citizens to respect time and be punctual at all times especially to work.

There have been concerns across Ghana about the disrespect for time, with even government officials often arriving late at state functions.

Workers and other groups of persons also turn up late for appointments with the Greenwich Meridian Time (GMT) mocked as ‘Ghana Man Time’ in Ghana.

With the worrying trend impacting negatively on the reputation of Ghana, the current campaign led by a civil society group is hoping to reverse the trend.

Other foreign diplomats in Ghana have also joined the campaign which is fast mobilizing support.

The German ambassador to Ghana, Christoph Retzlaff has also backed the initiative. He has signed the pledge and urged Ghanaians to respect time.

He said “it is my pleasure to publicly endorse your initiative” after meeting officials of the Punctuality Ghana Foundation in Accra.

The group met the German ambassador due to the general assertion that Germans are time conscious.

Retzlaff said “Punctuality has been and still is a kind of German trade mark. The issue of punctuality has for me two perspectives.

The first perspective is simply has to do with courtesy, respect for the person you are supposed to meet. The second perspective is in a modern and complex economy, society like Germany, it will simply be an enormous waste of productivity, a loss of efficiency if everybody will come one hour, two hours late to an appointment.”

Emmanuel Amarquaye, Punctuality Crusader at the Punctuality Ghana Educational Project, said disrespect for time is “a major challenge” in Ghana and ” there must be an orientation to change that”.

Those behind the punctuality campaign are hoping Ghanaians will back it to improve the state of time consciousness and productivity.