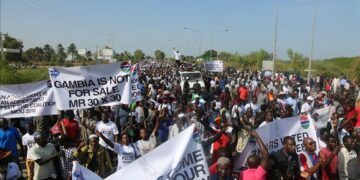 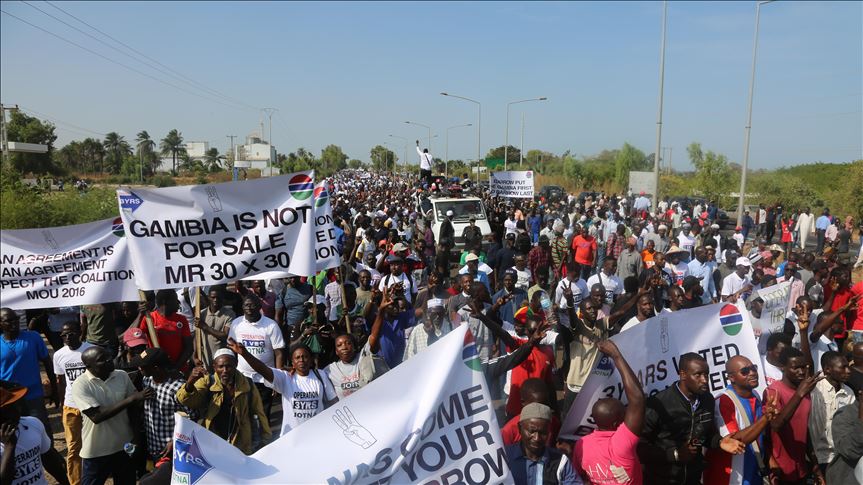 Operation 3-Years Jotna has been pushing for Adama Barrow's exit.

The Gambian government has banned a group called Operation 3-Years Jotna, which has been pushing for the resignation of President Adama Barrow.

The decision to ban the group follows a violent clash between protesters and police officers on Sunday.

The protesters were marching on the streets demanding the resignation of President Adama Barrow as part of activities coordinated by the Operation 3-Years Jotna group.

But Gambian police clashed with protesters, firing tear gas at them after they attempted to divert from approved routes for the protest march.

Scores of protesters were reported to have sustained injuries and were rushed to health facilities for treatment.

In a statement the government said it “renders Operation 3-Years Jotna, a subversive, violent and Illegal Movement and hereby bans the movement from ever operating within the shores of The Gambia.

Members of the public are hereby notified that in fact, the Jotna Movement was never legally registered but Government in exercise of its openness and adherence to the democratic rights of citizens, allowed them to operate so long as their activities were consistent with the law.”

According to the government the group is “an Illegal Movement that has all the attributes of a subversive group determined to illegally unseat the constitutionally elected Government of President Adama Barrow and is therefore, banned forthwith.”

The government statement signed by spokesperson, Ebrima G Sankareh said “Henceforth, any person, Radio Station, business or group that chooses to do business with Operation 3-Years Jotna and or promote their agenda will be in violation of this pronouncement and will face severe consequences.”

“The Gambia Government also announces that police have arrested some 137 people among them, Executive members. Some are in hiding while others are attempting to flee the jurisdiction,” the statement added.

The demand for Barrow’s resignation is in fulfilment of a promise he made during his campaign in 2016 to cease power after 3 years in a transitional government.

Barrow promised to step aside after three years should the coalition win the 2016 elections, but he is bent on continuing and further seeking re-election in 2021.

Leaders of Operation ‘3 year Jotna’ movement, say they want to hold the government and all politicians accountable.

President Adama Barrow has already said he won’t resign from office as he registers a new political party to seek re-election.

Last year President Barrow said he was convinced that Gambians wanted him to form his political party as pressure mounts on him to resign from the coalition party that brought him to power.