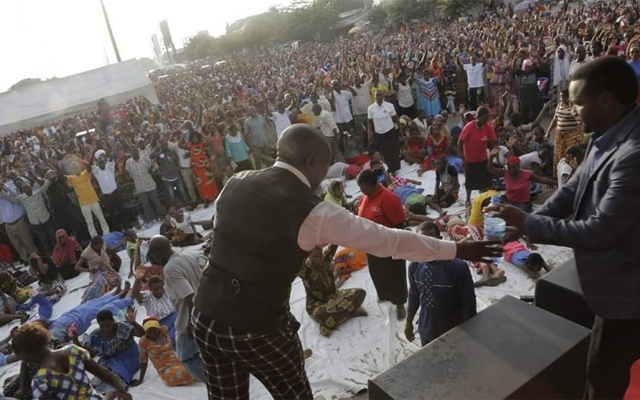 At least 20 people were killed in a church stampede in Tanzania on Saturday.

Officials said they were trampled to death at an open-air evangelical Christian church service in the north of the country.

Local media reported that the incident occurred when worshippers were attending a prayer event led by the popular preacher, Boniface Mwamposa.

Boniface Mwamposa heads the Arise and Shine Ministry in Tanzania.

A local area official in the northern town of Moshi, Kippi Warioba told the AFP that the number of deaths could rise.

“So far, 20 people have died, but the death toll could increase as there were also wounded,” Warioba told AFP.

A witness also told the AFP that the stampede occurred when preacher poured an oil on the ground and the crowd surged toward to touch it.

The worshipers were hoping to touch it so they can be cured of sickness.

“Dozens of people immediately fell being jostled and trampled, and some died. We have counted 20 people killed — but there are also wounded.”

“It was horrible, people trampled on mercilessly, jostling each other with elbows,” said another witness, Peter Kilewo.

“It was like the preacher had thrown bundles of dollars about… and there were all these deaths!”

Tanzania like many African countries continue to witness the rise in the number of pastors who preach about prosperity.

They often promise to solve the problems of their followers, by curing them and ending their poverty status.

Man loses wife to his pastor who presided over their wedding