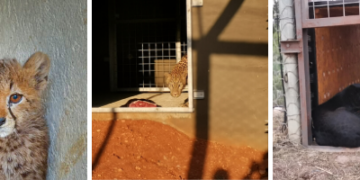 Bringing some much needed good news to these uncertain times, international wildlife charity Born Free is delighted to announce its most recent successful rescues and rehoming projects – two cheetah cubs from the illegal wildlife trade in Ethiopia, and two leopards from the failed Bloemfontein Zoo in South Africa.

The male and female cheetah cubs, which are yet to be named, are thought to be siblings and are only months old.

They were seized by the Somali regional authorities in Ethiopia, having most likely been taken from the wild to meet the demands of the pet trade in the Middle East.

After confiscation, the cubs were being cared for at a local police station. Born Free was notified of their situation and were able to give them a lifetime home at Ensessa Kotteh, its wildlife sanctuary in Ethiopia, once all relevant permissions had been issued authorising their relocation.

Busting the Myths – the truth behind trophy hunting

In South Africa, Born Free had been following the case of Bloemfontein Zoo for some time and understood that there were serious animal welfare concerns at the Zoo, including lack of food for animals, completely inadequate living conditions and a lack of veterinary care.

In March, the charity was asked by the local SPCA if it could assist in the rescue and rehoming of the animals, with a focus of providing a lifetime home to the zoo’s two leopards – Mowgli, a black leopard approximately 18 months old and Zeiss, a spotted leopard around six years old. Luckily, Born Free was able to offer them both a place at its big cat sanctuary in Shamwari Private Game Reserve.

“These are two very different cases, but they highlight the problems with big cats in captivity, and the continued exploitation of wild animals,” explains Dr Chris Draper, Head of Animal Welfare and Captivity. “The cheetah cubs are active and alert, despite their ordeal, but they are vulnerable and have a long road ahead. Both are undernourished and walking with a slight limp, and the female also has two older, injuries to her front paws.

“The leopards have now been released into their main enclosures at our big cat sanctuary. Mowgli is very nervous, while Zeiss is more inquisitive, but both are eating, drinking and settling into their new homes.

“These animals have all had terrible starts in life, whether in the illegal wildlife trade or in inadequate captivity in zoos. Born Free is delighted to offer lifetime homes for both sets of cats, and hope they can now all thrive in a more natural environment with the best care possible.

There is very little space in sanctuaries for wild animals rescued from captivity: to achieve the maximum impact for animals, we need to work to prevent such problems from arising in the first place, by stamping out the illegal trade in animals as pets and tackling the wholescale exploitation of animals in zoos worldwide.”

To support Born Free in providing these animals with lifetime care visit www.bornfree.org.uk