There has been confusion at some centers as Ghanaians register for the compilation of a new voters’ register.

The Supreme Court threw out several reliefs being sought by the NDC led by Former President John Mahama including a declaration that the EC should not be allowed to exclude the old voters’ ID card from the list of documents to be used for the compilation of the new roll.

Registration of voters for the issuance of the new card is taking place at some 33,367 registration centres. 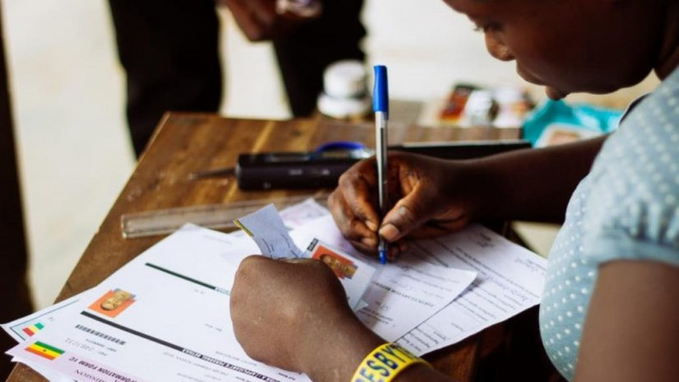 It is being conducted in phases, each spanning six days.

The EC with the collaboration of the Ghana Health Service promised to deploy some 7,000 health assistants to enforce the Covid-19 safety protocols.

But the said protocols especially restrictions of social distancing have been blatantly flouted at the centres as the registration commenced today.

Some police commanders have also threatened to arrest some applicants who have queued without mandatory masks.

There have also been reported clashes in the Asutifu South constituency where some thugs have attacked an executive of the ruling party.

There are also reports of faulty verification machines at some centres which has also delayed the exercise on the first day.

The Electoral Commission has not officially assessed the conduct of the exercise following the numerous challenges at some registration centres.

But the chairperson of the commission, Jean Mensah has assured eligible voters that they will not be disenfranchised.

“We would like to assure all of you that as a commission, our rationale for compiling a new register is not to disenfranchise any eligible voter, on the contrary it is to ensure that all our citizens who qualify are afforded the opportunity to register and cast their votes,” she told reporters.

The heavy deployment of the military to border towns ahead of the exercise has also triggered another controversy.

The biggest opposition party NDC says the move is to intimidate people in its stronghold communities along the Togo-Ghana border from registering as they are deemed by the ruling party as foreigners.

Samuel Okudzeto Ablakwah, a leading lawmaker from the opposition party said “We are all one people, we are Ghanaians, why is President Akufo Addo as commander in chief reducing the Ghana Armed Forces to some citizenship inspection unit? Why? You, you look like Togolese, you can’t come in here, you go back. Is that what the Armed Forces is for?”

The government has said that the deployment isn’t only to the opposition’s stronghold but to all borders town in the country.

Ghana’s president, Nana Akufo Addo justified the move which he said in a televised address was to deal with acts of terrorism.

He however insisted that only Ghanaians will be allowed to register and take part in the upcoming election.

“The election on seventh December must be a Ghanaian election, not a West African election, conducted with a register of Ghanaian voters. That is the only way, true will of the Ghanaian people can manifest. The Ghanaian people must go about the exercise of their civic duties in peace and in freedom,” the president said.