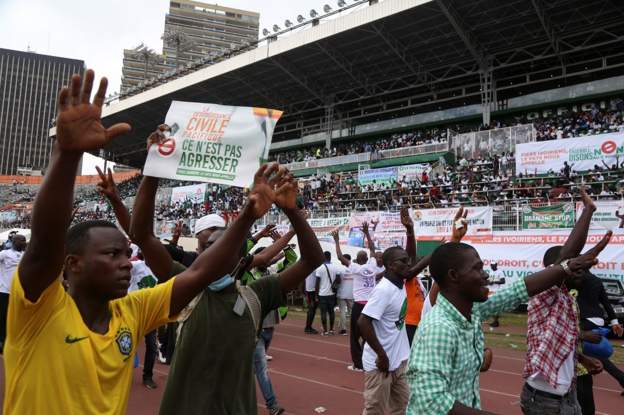 Thousands of opposition supporters in Ivory Coast on Saturday held a major protest against President Alassane Ouattara’s decision to stand again for office.

They gathered in a stadium in the main city, Abidjan, to continue agitations over President Ouattara’s third term bid.

Many of them were dressed in the national colours of green and white and carried banners calling the third term bid illegal.

The country’s main opposition presidential candidate, Henri Konan Bédié had called for a civil disobedience campaign to stop the incumbent Ouattara from running.

Ouattara’s bid for a third term in office has sparked agitations with fears it could trigger another post-election violence.

Henri Konan Bédié, a former president said opposition parties in Ivory Coast are united to protect the stability of the nation.

President Ouattara has already been approved by the constitutional court to fulfill his ambition of seeking a third term in office.

At least ten people have died during clashes over his decision to run after announcing that he won’t.

Coulibaly’s death forced Ouattara to renege on his promise not to seek a third term in office.

His main political rivals including former president, Laurent Gbagbo and former rebel leader, Guillaume Soro have been barred from contesting in the election.