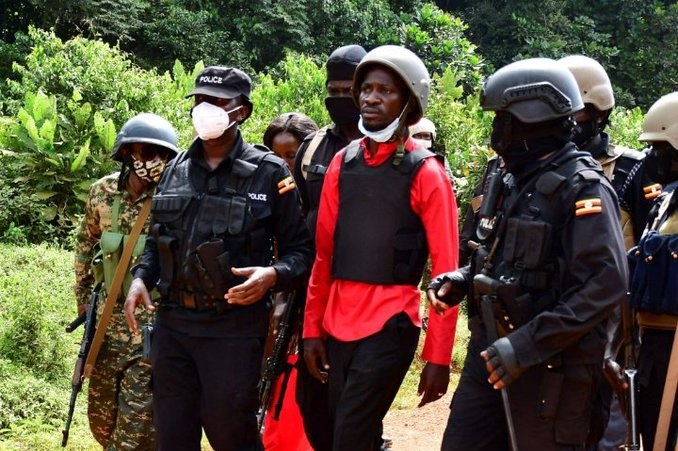 “Bobi Wine and his entire campaign team arrested in Kalangala! Media blocked – Admin,” read a tweet on the handle.

The police however said they have foiled an assembly with his supporters as a result of health regulations to curb the spread of Covid_19.

In a statement, the police said Robert Kyagulanyi – whose artist’s name is Bob Wine has since been transferred home in Kampala.

“Please disregard false claims that Boni Wine was arrested while campaigning the Lake Victoria area. He was prevented from continuing to organize mass rallies, against the backdrop of increased threats from the coronavirus” the statement said.

Several members of his team were arrested after being filmed “deflating the tires of police vehicles, inciting violence, blocking police officers on duty, violating health protocols and committing several traffic violations,” according to the police.

But Bobi Wine insisted he was arrested and said “When I was arrested today, I was dumped into a mobile prison van which was tear-gassed.”

When I was arrested today, I was dumped into a mobile prison van which was tear-gassed. My campaign team is under arrest! I was airlifted in a military chopper & dropped at my gate. My home is surrounded. Gen. Museveni violently restricting us while he campaigns daily! Cowardly! pic.twitter.com/KJtWtplzva

The campaign for next month’s presidential elections in Uganda has been marred by violence with the UN calling for an end to the arrests of political opponents.

Last month, clashes between supporters of Bobi Wine and the police over his arrest resulted in the death of at least 54 people.

Wine was charged with breaching Covid-19 prevention guidelines for addressing mass rallies before being released on bail.