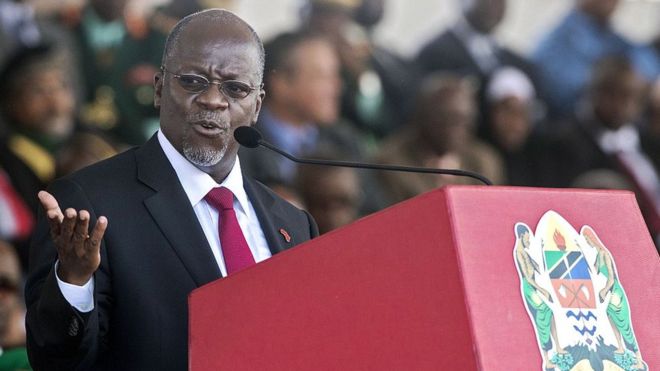 Tanzania’s President John Magufuli is on admission at a Kenyan hospital undergoing medical treatment for Covid-19.

Opposition leader Tundu Lissu revealed in an interview with the BBC that Magufuli had coronavirus and a cardiac arrest.

Sources at the hospital he is currently on admission at said the Tanzanian leader had breathing challenges.

Magufuli was flown to the Nairobi hospital this week after his condition deteriorated. He had not been seen in public for days.

On Tuesday, opposition leader Tundu Lissu questioned the whereabouts of the Tanzanian leader.

He wrote on Twitter that “The President’s well-being is a matter of grave public concern. We’re informed when Kikwete had prostate surgery. We’re told when Mkapa went for hip replacement.

We’re not kept in the dark when Mwalimu fought leukemia. What’s it with Magufuli that we don’t deserve to know?”

It’s a sad comment on his stewardship of our country that it’s come to this: that he himself had get COVID-19 and be flown out to Kenya in order to prove that prayers, steam inhalations and other unproven herbal concoctions he’s championed are no protection against coronavirus! pic.twitter.com/n1qQHgWnSA

On Wednesday Mr. Lissu confirmed to the media that Mr. Magufuli who denied the existence of Covid-19 was in critical condition.

He claimed that officials are “planning to sneak him out to India to avoid social media embarrassment from Kenyans.

They feel that it’ll be more embarrassing if the worst happened in Kenya.” The most powerful man in Tanzania is now being sneaked about like an outlaw!”

The latest update from Nairobi: “They’re planning to sneak him out to India to avoid social media embarrassment from Kenyans. They feel that it’ll be more embarrassing if the worst happened in Kenya.” The most powerful man in Tanzania is now being sneaked about like an outlaw!

The 61-year-old president of Tanzania has refused to accept the fact that Covid-19 is real and deadly, in order to protect his citizens.

Instead of following science, he didn’t encourage the adherence to safety protocols, urging people to pray and consider the virus devilish.

A top presidential aide of Mr Magufuli died hours after the vice-president of the country’s semi-autonomous islands of Zanzibar died from Covid-19.

Last year, President Magufuli declared his country “coronavirus-free” saying the success was due to prayers by citizens.

He told worshippers in a church that “The corona disease has been eliminated thanks to God.”

Magufuli had said that the vaccines could harm the population, but he didn’t provide any evidence to back that claim.

How President Magufuli is dealing with COVID-19 in Tanzania.

This man is very sick!!! pic.twitter.com/LICv0MH7Ua

The World Health Organization (WHO) expressed concern over the government’s strategy after it stopped publishing data the virus.

Last month Tanzania said that it doesn’t have plans of importing Covid-19 vaccines to protect citizens.

Mozambique: Family of 25 dies after eating meal from wild plants