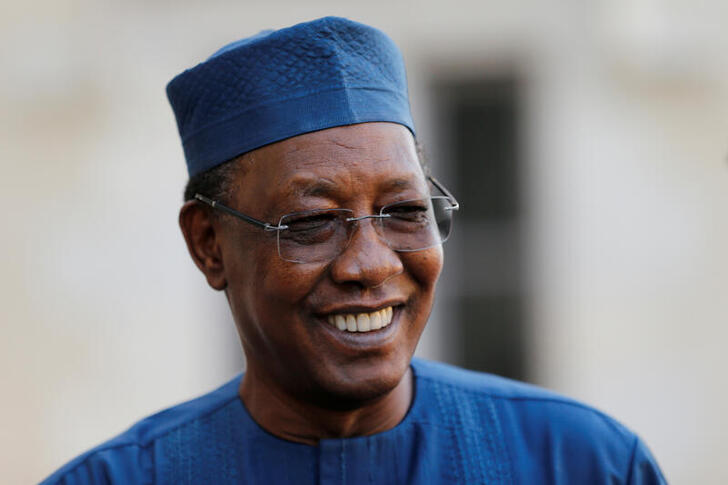 He received military honours and a prayer at the Grand Mosque of N’Djamena.

Mr Déby’s body was flown to Amdjarass, a small village next to his hometown of Berdoba, near the Sudanese border for burial.

At least 16 Heads of State and Government, including French President Emmanuel Macron and Cameroon’s Minister Delegate at the Presidency in charge of Defence, Joseph Beti Assomo are attending the official burial ceremony of Late President of Chad, Field Marshall Idriss Deby Itno pic.twitter.com/gt6fXsmvAX

President Déby was killed while visiting troops on the frontline fighting rebels over the weekend.

The rebels are from the Front for Change and Concord in Chad (Fact), a group formed by dissident army officers in 2016.

The 68-year-old Deby was a former army officer who came to power in 1990 after he overthrew autocratic leader Hissene Habre.

On Monday, provisional results from the election on 11 April projected Deby as winner with 80% of the vote.

He was set to secure a sixth term in office before his death. Déby was one of Africa’s longest-serving leaders.

He has played a key role in the fight against Islamist militants in West and Central Africa during his presidency.

Chad under Deby is also one of the largest contributors to the UN peacekeeping mission in Mali.

A military council led by his son, General Mahamat Idriss Déby has taken over power after his death.

But he doesn’t have the full support of the army with the opposition also rejecting the takeover by the military calling it a coup.

Gen Déby, 37, has said the army will hold democratic elections in 18 months.