The gift of queer and trans* Ghanaian activists 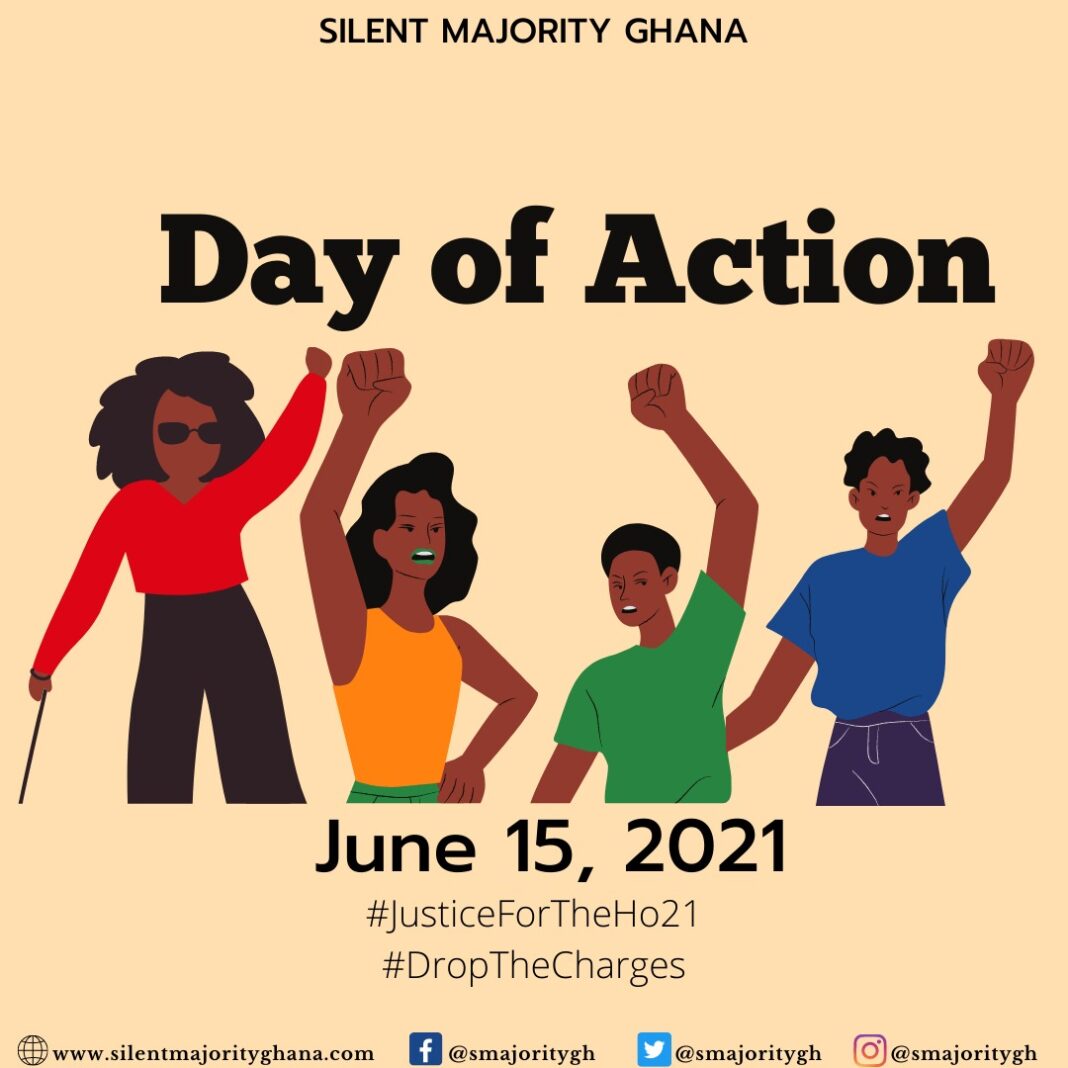 On June 23rd, 2021, Rightify Ghana called attention to an exchange of letters between Ghana’s Speaker of Parliament, Alban S. K. Bagbin and a certain Emmanuel Abankwah Kesse, who dubs himself a political activist.

Dated May 28, 2021, Kesse’s letter to the Speaker of Parliament seeks to curtail efforts by various activist groups to ensure the release of 21 individuals wrongfully arrested for “unlawful assembly.”

Kesse writes, “I think there is a need to amend section [sic] of our laws that makes these LGBTs think what they are doing is constitutional.” In other words, Kesse is demanding that Ghana’s parliament effect laws that make gathering for a cause he does not like illegal.

Through his actions, Kesse is seeking special treatment to deny fellow Ghanaian citizens from gathering and when taken to its logical conclusion, from even remaining in our homeland, as he made reference to banishment.

The fact that the Speaker deigned to respond to such a request with appreciation and assurances should be troubling to all of us. Within less than two weeks of sending his letter, on June 15, 2021, the Speaker responded to Kesse.

In that letter, the Speaker concurs with Kesse, adding that “it is indeed a phenomenon that should not be encouraged…due to its eventual negative impact on society.” The Speaker’s response demonstrates his agreement that the freedoms guaranteed to all Ghanaians should in fact, be denied to some of us.

Fellow Ghanaians, what exactly are these people talking about? What is the negative impact that the Speaker and Mr. Kesse are so concerned about that they will seek to erode the civil rights of Ghana’s citizens? Is it those of us dubbed LGBTs (as if we are not also flesh and blood human beings) who are illegally and dangerously using sirens to evade traffic through Accra?

Is it we who are harassing couriers and other drivers on the roads as they try to do an honest day’s work? Or is it so-called LGBTs who are charging rents so high that people cannot afford a decent place to live despite their best efforts? Are we the ones who have suppressed wages whilst fuel prices go up? Or is it we who are making your children’s education ineffective? Is it someone’s sexuality that is polluting our waterways, killing fish, and pillaging our forests?  No.

The responsibility for all these social ills falls squarely on government mismanagement and failure. Yet, the failed Ghanaian government is turning us against one another, using “LGBT” as scapegoats to distract from government’s shortcomings in the lives of Ghana’s citizens and residents, who deserve dignified lives regardless of their economic position. Whilst our fellow citizens turn against those dubbed LGBT, the government gets away with absconding our resources and getting wealthy off the backs of our hard work.

Fellow Ghanaians do not fall for this con. Do not allow the government to turn us against one another. Regardless of what you will call us, queer and trans* Ghanaians are just like you. We are all doing our best to make it in this difficult country. We want the same things most of you want: to be able to gather freely; to have a decent place to live; to have good jobs that pay us well; to have loving relationships with our parents, children, and friends; to enjoy the occasional night out; to have access to healthcare.

When we allow the government, religious institutions, or anti-queer media organizations to tell us what we think, what “Ghanaians believe” as they put it, we become complicit in our own suffering. Why should the government invest in education or improve job conditions or roadways or water access when it can always whip a meaningful portion of the public into a frenzy about the bedroom activities of some of its citizens?

I get it – a number of Ghanaians do not believe that we, those they have dubbed LGBTs, are humans. We see it in questioning about whether we deserve human rights. Of note, MP Mahama Ayariga asked at the Gender Minister’s confirmation hearing of his fellow Ghanaians “are they human?” Likewise, we see these efforts at dehumanization in online screeds and hear on the radio about how even animals do not engage in same-sex behavior. Of course, this is untrue but that is not the point. The point is to deny the humanity of a group of people. But to what end?

If you allow the government to scapegoat us, you offer the state a free pass for its failures. You say to the government that so long as they criminalize and attempt to dehumanize other people, you will turn a blind eye to their failures and continue to suffer while only a few people and their children have access to adequate healthcare, education, and decent living.

And once they have killed all of us, then what? Who will be next? The erosion of civil rights and liberties of one portion of the population only makes room for others. In the last 6 weeks alone, the Ghanaian government has arrested 33 women they deemed to be sex workers and 215 people in a fishing expedition to fight crime.

Reports indicate that in none of these instances did the state have clear evidence against the arrested people. Yet there has been no pushback against this egregious overreach and state terrorism against people who are deemed not to matter.

The gift that LGBTIQ Ghanaians offer to the general population is that we are fighting vehemently against this erosion of human dignity visited upon us by the government. Rather than siding with the oppressive state, more Ghanaians should see how we are aligned and fight with us.

Now more than ever, we all need to come together to challenge the chauvinism and lawlessness of the Ghanaian government. Speak up and out against this state-sponsored violence, because if not, after us, you got next.

By way of conclusion, it is worth noting the facility with which one single individual with an agenda to harm other Ghanaians can access the highest seat of Parliament. By comparison, activists fighting for the preservation of freedoms and human dignity are barred.

Since the arrest of the 21 people who gathered to learn how to identify and report human rights abuses in Ghana, activist groups including the Alliance for Equality and Diversity (AfEd), the LBQT Consortium, Rightify, LGBT+ Rights Ghana, and Silent Majority, Ghana have worked tirelessly to ensure their release.

For weeks, we attempted to contact the State Attorney in Ho, who was prosecuting the case, the head of the Volta Regional Police, who effected the arrest, and later on Ghana’s Attorney General and Minister of Justice, all to no avail. We even recruited fellow citizens to amplify our efforts through telephone campaigns to various stakeholders.

Our calls were met with hostility and phone lines were disconnected. We, the people, were not able to gain access to the halls of power. Yet, one Mr. Kesse could write a letter with a single signature and receive a response from the Speaker within 2 weeks. Our many telephone calls and petition signed by over 600 people and delivered to Ghanaian embassies in the US and UK on June 14, 2021, and to the Attorney General’s office on June 16, 2021, has yet to receive even an acknowledgment of receipt.

This unequal system demonstrates how the concerns of the masses of Ghanaian peoples are sidelined in favor of oppressive systems, rules, and regulations that harm all of us. Why can some Ghanaians’ complaints be heard and taken up by government whilst others will not? What makes Mr. Kesse more important than the rest of us – the 600+ signatories to the petition, the dozens more who made phone calls, the 21, 33, or 215 beloved Ghanaians who were arrested and thrown in prison without due cause?

Global celebrities sign letter to back LGBTQ+ rights in Ghana