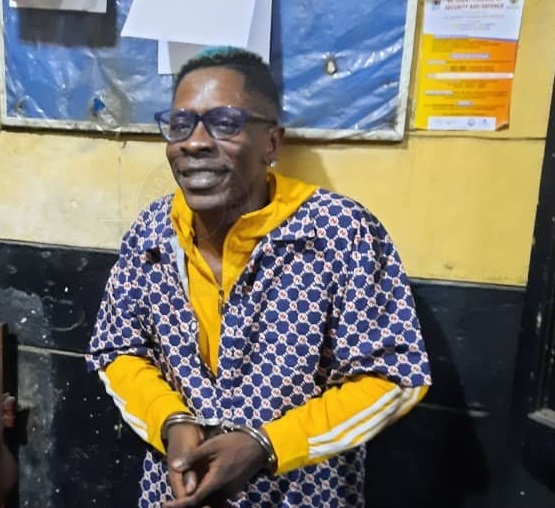 Police in Ghana have arrested celebrated dancehall musician Shatta Wale and one of his personal assistant over a fake shooting claim.

The Police announced the arrest on their Facebook wall on Tuesday evening with reports of a third person also arrested over the incident.

According to the police the three were arrested for allegedly spreading false information and intending to cause fear and panic.

Aides of Shatta Wale on Monday night had circulated on social media that the musician had been shot by unknown assailant.

After we publicly declared him and one other person wanted, the suspect, Shatta Wale, turned himself in today Tuesday 19th October, 2021. Read more from the link below;https://t.co/7ursjdtMFr pic.twitter.com/ouBvIkxEeM

Police then mounted a search for him following those reports with his personal assistant, Nana Dope telling some media outlets that the artiste was receiving treatment at an emergency unit of a health facility in Accra after the gun attack.

He said Shatta Wale, who celebrated his birthday on Sunday, October 17, 2021 is responding to treatment.

In a statement, the police service said the Musician’s whereabouts remain unknown despite making contacts with his close friends and family.

“A team has visited the house of Shatta Wale and he cannot be found there.

Over the last few hours, the Police have searched and continue to look for Shatta Wale at hospitals in Accra,” the statement said.

But the musician on Tuesday morning reacted to the news of the police launching a search for him saying he was surprised no action was taken against a prophet that prophesied that he will be shot dead on October 18, 2021.

“So the police of this country want to tell me none of them saw those threatening statement online to take Action?

This pastor said 18th October shatta wale will be shot and you want to tell me you didn’t see from you cyber crime department nor did u hear or came across anything like that online?” he said on a Facebook post.

On social media, some Ghanaians believe the musician only pulled a stunt for public attention as they push for his arrest and prosecution for causing fear and panic.

Big brand like Shatta Wale faking death jxt to gain attention shows how inconsistent and irrelevant he is in Arnold Baidoo’s voice….the IGP shouldn’t spare him?

Shatta wale you are too grown a man to be pulling these silly stunts for clout ??‍♂️ now you know why you lost me as a fan

Meanwhile, a local group, the Alliance for Social Equity and Public Accountability (ASEPA) on Tuesday lodged a criminal complaint with the police against the musician over the incident.

The group asked the police to probe Shatta Wale popularly known as Charles Nii Armah (first respondent) and his agent one Nana Dope (his alias) also referred to as the second respondent for publishing or causing to be published a false news item that had the potential to cause fear and panic and also had the potential to breach public peace”.

Here are the 100 Most Influential Young Africans for 2020